Rio 2016 Olympics - Hundreds of pupils and staff from Timaru Boys High School have turned out for a public show of support for former pupil Tom Walsh, as he prepares to compete in Rio tomorrow. 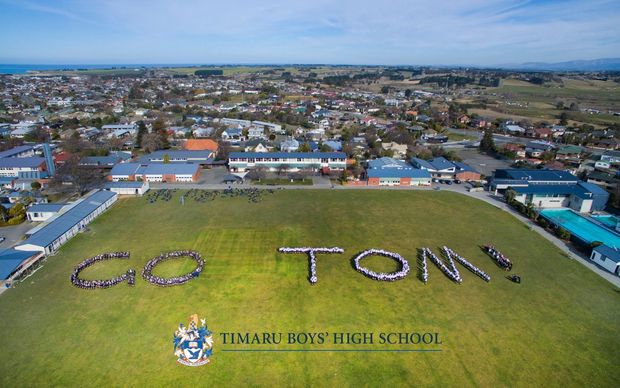 Earlier this week more than 700 pupils and staff gathered on the school's rugby ground, spelling out "Go Tom!"' on the grounds.

The photo, on the school's Facebook page, has proved popular on social media, with the post saying there was a "ripple of excitement rolling through the school in anticipation" of Walsh's appearance.

Rector Nick McIvor told RNZ staff decided to do it earlier in the week, with the school wanting to show the strength of support for Walsh and his quest for gold.

The school used its drone to capture the image, with the 680 pupils forming the "Go Tom" and 45 staff forming the exclamation mark.

Mr McIvor said the picture was sent to Walsh on the night it was taken, alone with messages of support.

Walsh was a boarder at the high school and the 24-year-old has kept a "close and personal bond" with pupils.

"He's a great role model for our young men in so many ways.

"We're very proud of him and just keen to get behind him, however it pans out he'll continue to be one of our favourite sons."

Walsh said he was in a confident frame-of-mind after he finished second in a strong field at July's Diamond League meeting in London.

World champion Joe Kovacs won there by half a metre, but Walsh believed he could overturn that difference and throw 22 metres - which should assure him of a medal.

"I know the type of shape I'm in coming into these Games and also knowing Joe, I know he's not going to throw another metre on top of that," said Walsh.

"I think there are four or five guys who can throw 22 metres. Whether they do or not is another question, so I think it comes down to a few of us who can have a go at getting gold."

Little seemed to faze Walsh, who despite his relaxed nature was appearing at his first Olympic Games.

He said his experience at the Glasgow Commonwealth Games prepared him well for life in the athletes' village.

He said there had been little gamesmanship in the lead-up to Rio between his competitors.

"Any competition you are in, no matter what shape, you are trying to throw as far as you can," he said.

"Some guys may be on the warm-up track talking a little bit of trash - 'I'm feeling a little bit stiff', 'my backs a bit sore and I'm not throwing that well' - but as soon as they start throwing you get a good idea of whether they were serious or not or just playing around."