The Englishmen finishes his contract on a supreme high, and the only question for Fiji is how to honour him appropriately.

Last year, to mark his achievements to date, the crew at FM96 and Fiji Village put a song together about him.

What will they do now?

Some are calling for honorary citizenship. Others say the nation will gift him a precious parcel of land.

The first gold medal for sevens rugby at the Olympics went to an extremely fitting team. And it's not as if they haven't had success before Ryan. Many of them are professional footballers playing in Europe, particularly France. 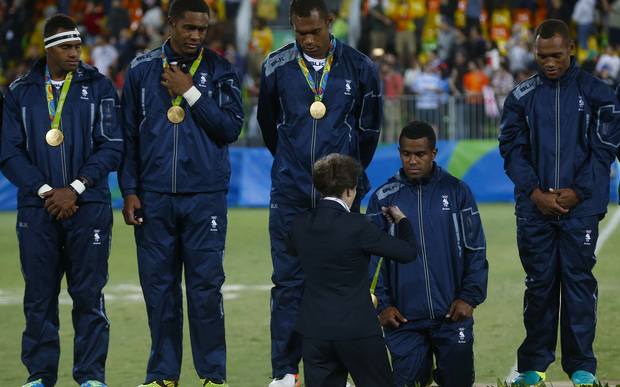 I was in Fiji weeks after they won the World Sevens in 2006 and there was still a party atmosphere with banners across the streets in Nadi town.

Fijians live and breathe rugby sevens and the historic nature of this Olympic game literally stopped the nation.

The Vice-Chancellor of the University of the South Pacific sent this note around, suspending classes. The Pacific foreign ministers, including New Zealand's Murray McCully, meeting in Suva, stopped to watch the game.

Victoria Parade near the markets in the capital, Suva, was temporarily closed. So were banks, with signs asking them to come back later.

Crowds had gathered at the National Stadium in Suva to watch and cheer on their boys, with bells ringing and tears flowing after the game.

This is how much it means to the small Pacific nation. School children in elation, partying in the streets.

People were literally standing in the middle of traffic, as they knew they could get away with it today.

They were literally dancing on the rooftops.

#Fiji #rugby7's #olympics. The village of players Viriviri and Tiliga turn it up for their team. Updates on @AJENews pic.twitter.com/2rjoCGaAuJ

Fiji Airways pledged to serve Fiji Gold as the beer of choice on their flights today. You have to feel sorry for Fiji Bitter - although it would have been a suitable drink if they had lost.

But Fiji were never going to lose this match.

For years, decades even, the Flying Fijians have had the football on a string and a seemingly sixth sense to know where their teammates are, giving them the confidence to throw the most outrageous speculator passes.

Their strong fingers grip the ball, making it look tiny; throwing it around like the Harlem Globetrotters.

And even when it doesn't pay off and the ball goes to ground, they have the tenacity and the fitness to all fall back together, regroup and launch a stinging attack on the opponents' line.

You can watch a bit of that here.

#FIJ have won #Gold at #Rio2016, but on the world series they have been producing plenty of magic. Here's a slice.https://t.co/M0biM6OglX

In Fiji, touch rugby is the default down-time pastime; even in the aftermath of Cyclone Winston on remote Vanua Balavu soldiers had a football for their work breaks.

Indians have impromptu cricket pitches in village streets, Samoan villages are characterised by their volleyball nets and worn grass. And the Fijian countryside is likewise dotted by its football fields and posts, some made from bamboo shoots, many bent under the weight of cyclone winds.

A game can spontaneously begin around you if you're not careful.

I was shocked the first time I played in a Fiji village, because the trick is, you can't get touched. It's a handover if you have a hand laid on you.

Which means there's no slow build-up. Every play is a chance to score. The kind of acrobatics the 'one-touch' rule gives rise to is stunning. And the nation's best players have all grown up playing on uneven surfaces, sidestepping their friends but also the holes in the ground and the frogs that appear out of nowhere in the monsoon rains.

And there's the cacophony of sounds: funny noises to tell a player where his teammate is behind him, and cackles of laughter when someone falls over or makes a mistake.

Millions around the world are now watching the razzle dazzle and the charm, and the sea of those beautiful sky-blue Fiji flags, that Prime Minister Frank Bainimarama has been unable to change, despite vowing to do so in the face of marches and protests. You would think with this win and exposure, his efforts are as dead in the water as John Key's.

All we've heard from the leader so far is that there will be a public holiday to mark the occasion.

It seems a lot of people don't know about Fiji - Google tweeted that Fiji was the number one trending search in the world after the win.

Fiji is the #1 trending search in the world as their rugby team wins the country's first medal. #gold #Fiji pic.twitter.com/FhoCMf41MT

What they will find out in their searches is that the nation honours its players and the players in turn honour their maker. There's a growing trend of Christian rugby players turning to prayer on the pitch. We saw it recently with the Lions following their defeat in the Super Rugby final to the Hurricanes. But it started with these Pacific nations.

And it's not a show for the cameras. Here's the family of the captain, Osea Kolinisau, interrupting their loud celebrations to give thanks.

The players received their gold medals from Princess Anne getting on their knees - some saying it was because they were too tall for her, others saying it was an act of respect.

If there's another thing Fiji can teach us about sport, it's how to win with honour and humility.

I mean, oiled-up shirtless Tongan flag bearers sure make for pretty pictures but a group of gold medal wearing winners taking a knee and giving thanks is far more stirring.

*RNZ International's Alex Perrottet is a regular visitor to Fiji as a reporter and volunteer worker.