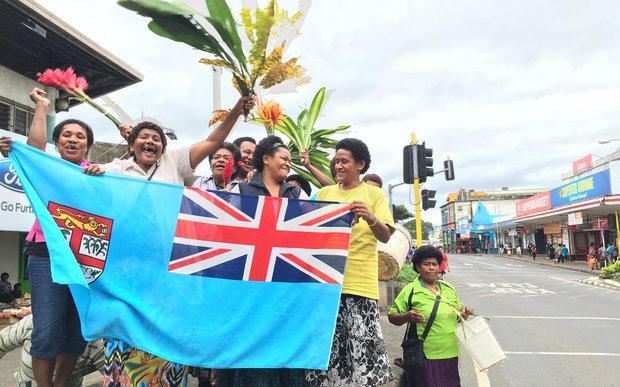 "Is the airport open today?" a traveller asked outside Nadi Airport.

Of course the airport was open - but whether anyone was working was another matter.

There's a nation-wide party happening in Fiji today as the island nation made Olympic history, not only their first ever Olympic medal - but making sure it was of the gold variety.

The anticipation had been building all week. Locals and ex-pats had been rising early to watch every Rugby Sevens game, neighbours woken by the cheering and screaming at televisions inside people's homes.

Today, the cheers from several hundred construction workers decked out in high-vis jackets echoed across the international terminal at Nadi Airport.

Made up mainly of Fijians, New Zealanders and Australians, the firm made sure there was a spot for its workers to watch the momentous game.

In a dark, cordoned-off concrete area near the international departures check-in, up to 400 construction workers crammed inside in front of a ceiling-to-floor projector screen set up to stream the match. 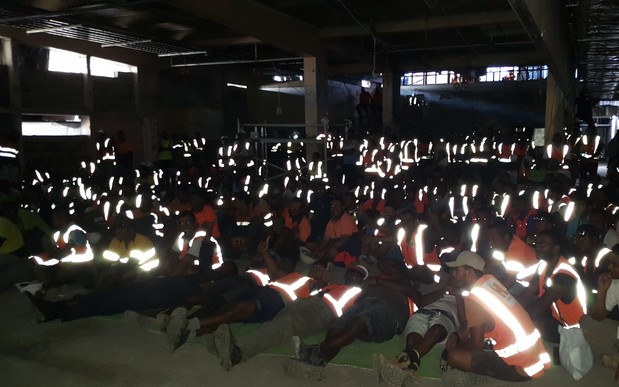 Construction workers, in their high-vis gear, cram inside an area of Nadi Airport to watch the game. Photo: RNZ / Juliette Sivertsen

"Everyone is feeling a bit stressed," one local told me before the match. While many were confident Fiji would bring home the gold, there was clearly some nervous tension. At the Olympics, the top spot is never guaranteed.

Workers throughout the rest of the airport crowded around whatever mobile device or radio they could find so as not to miss out. Tiny screens attracted dozens of people at a time.

First came the national anthem. I have witnessed many New Zealand anthems sung passionately at rugby matches but none could rival the voices of these contractors, builders and engineers singing and wearing their hearts on their sleeves.

Nobody bothered checking in. The counters were unattended anyway. There was no hustle and bustle as usually expected at an international airport - just cheering and chanting supporters of the Fijian Rugby Sevens team standing and sitting in front of screens.

The cheers grew louder and stronger as the gap widened in the match between Fiji and Great Britain.

As the final seconds of the game passed, the screams were deafening. Hard-hats were thrown into the air, as Fijians throughout the international terminal leapt to their feet, dancing on the spot, arms in the air. At this point, the small group of travellers waiting at the check-in counters began smiling too.

Then the Fijian construction workers broke out into song; I could feel the emotion hit the back of my throat. I was not the only one.

Some say there'll be a national day off because of the Olympic gold, others say it'll last all week - and one local told me the party will go on for six months.

Today a nation has been unified. Any differences or tensions in this country have been pushed aside as Fiji celebrates together as one.

Now the game has finished, the airport's getting busy again - and the small group of travellers who patiently waited throughout the match have finally checked in.