For someone who does "not like too much palaver in my life", it's hard to know just how much joie de vivre Steve Hansen will show if the All Blacks retain the World Cup. 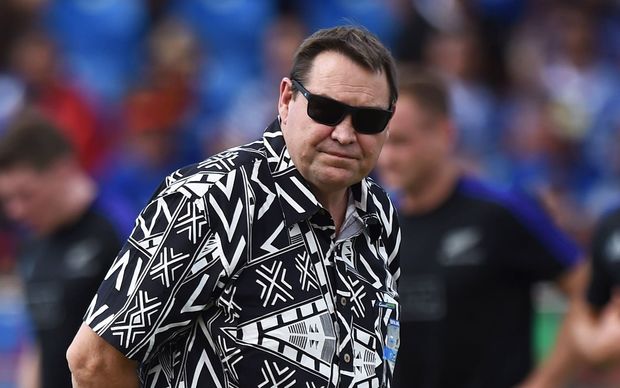 World Rugby's coach of the year for three successive years, Hansen has piloted the All Blacks with aplomb since their 2011 triumph.

Under Hansen the All Blacks have played 53 Tests, losing just three with two draws.

Graham Henry, who guided New Zealand to glory four years ago, ending a 24-year wait, and who endorsed his appointment as his successor, believes the current All Blacks team are the best ever.

Hansen scoffed at such a suggestion from South Africa coach Heyneke Meyer but even he may acknowledge such an accolade for a team taking their final bow before a changing of the guard and the end of a dynasty.

Contracted through to the end of the 2017 season, the 56-year-old former policeman is likely to stay around to at least begin another rebuilding job.

Facing him then will be the unenviable task of replacing key lieutenants such as Richie McCaw, although the All Blacks skipper has yet to announce he will retire, Dan Carter and Ma'a Nonu.

The personnel may change but Hansen's coaching philosophy will not.

"Our job is to make the complex simple," he said. "The simpler you can make it for somebody, the easier it is to do it."

For Hansen, "the blueprint of the game never changes".

"We have got athletes who are comfortable with the ball in their hands and who can play a physical game if they have to.

"Win your set-pieces, get good quality ball and hopefully score points. But how you structure your game around that, you can always tinker with it.

"It is up to the coaching staff and the players to use their imaginations as to how you can do that. That's the formula I have used all my life."

With sustained success has come a coach clearly more at ease with himself.

As Henry's long-time assistant he had a somewhat prickly relationship with the media, a position that eventually led him to announce he was working with a public relations consultant to work on his image.

Hansen has cut a far more relaxed figure at this tournament, perhaps taking his cue from being made high chief of a Samoan village, a title bestowed on him after the All Blacks played in Apia in July.

There are not many coaches of any repute who can boast that.