Winger Adam Ashley Cooper's hat-trick of tries sent Australia into a first World Cup final since 2003 after a 29-15 victory over Argentina secured a showdown with holders New Zealand at Twickenham next weekend. 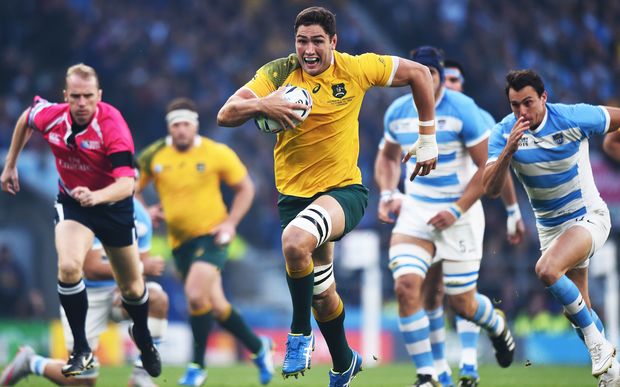 The Wallabies were superior at the breakdown where David Pocock was immense and too clinical in the backline for the gung-ho injury-hit Pumas who paid the price for costly early mistakes.

Look back at live scoring here

Australia, in control from two early tries, were under the cosh for long periods of the second half but resilient defence and Ashley-Cooper's third try on 71 minutes put the game beyond reach.

"It was a tough game and we knew it would be. We had to defend a lot. That took a fair bit out of the tank," said Australia captain Stephen Moore.

Coach Michael Cheika added: "What we did was let the game open up which suited them. We had to work hard to stop them from scoring a try. We can improve again and that's really important now."

Sunday morning's match will be the first time the southern hemisphere powers, both World Cup holders on two occasions, have met in a World Cup final, having clashed in three semis.

The only final not to feature either New Zealand or Australia since the tournament's inception in 1987 was eight years ago when South Africa beat England.

Australia, who scraped into the semi-finals with a controversial last-gasp penalty against Scotland, flew out of the blocks with 14 points on the board in the opening nine minutes.

Sixty-seven seconds had elapsed when Australia lock Rob Simmons intercepted a risky Nicolas Sanchez offload to sprint under the posts from 30 metres out and set the tone for an open and exhilarating contest.

The Pumas, with confidence high after their mauling of Ireland, lacked nothing in ambition but the ploy backfired again when they knocked-on from a quick tap-penalty deep in their own half.

Superb back play by the Wallabies from the ensuing scrum ended with a fine floated pass from Bernard Foley that gave Ashley-Cooper a clear run to the line.

The Pumas, who lost winger Juan Imhoff to a head knock after 20 minutes, were weakened further when lock Tomas Lavanini was sent to the sin-bin for a no-arms tackle on Israel Folau.

Worse was to follow when captain Agustin Creevy, a fitness doubt all week, trudged off after half an hour.

The Wallabies quickly rubbed salt in the wounds, Ashley-Cooper this time taking a long pass from Will Genia to score in the left corner.

Sanchez's boot gave the Pumas hope as they trailed 19-9 at the break and two more penalties from the tournament's top points scorer got his side to within seven with plenty of time left.

The Pumas came at the Wallabies hard and it needed plenty of scrambling defence to keep them at bay.

Having held firm, Australia got back into Pumas territory and wrapped up the game when winger Drew Mitchell zipped through a flurry of tired tacklers and Ashley-Cooper walked the ball over the line.