OPINION: It's hard to be too critical of a performance when you win and reach a World Cup final, but the All Blacks almost lost to a side that never really looked like scoring a try and relied on kicking goals. 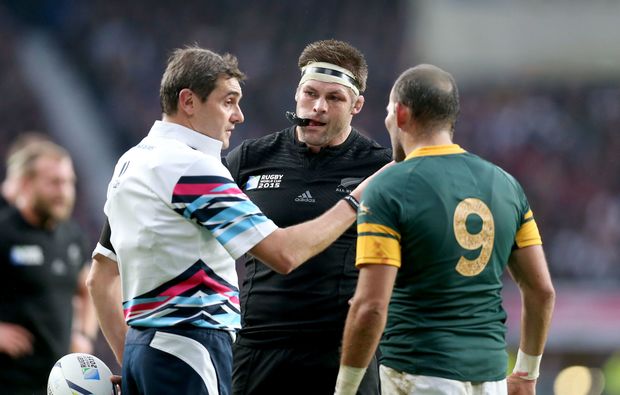 The Springboks and other teams have done it before and there will be plenty of teams that will do it in the future.

There was a warning early on that the Springboks had their kicking boots on and the All Blacks should be wary.

As far as the South Africans were concerned all they had to do was get into the opposition's half, put some pressure on the All Blacks at either scrum time or at the breakdown, and French referee Jerome Garces was going to blow his whistle.

I said at half-time that I felt the All Blacks would win as long as they stayed in the South African half, and generally that was what they were able to do.

When you think about it, it was a good game plan by South African coach Heyneke Meyer. He knew his forwards could at least be the equal of the All Blacks and while his backs perhaps lacked the same penetration as the All Blacks, he knew first-five Handre Pollard could kick goals from anywhere.

This is World Cup playoff rugby and it's not flashy.

The bosses of the game want it to be contestable and it certainly is, but it's a fine line between getting turnover ball and in the referee's mind doing it illegally. It was interesting that often the All Blacks decided not to contest the ball at a breakdown and instead lined up in defence. You have to know when to hold 'em and know when to fold 'em. 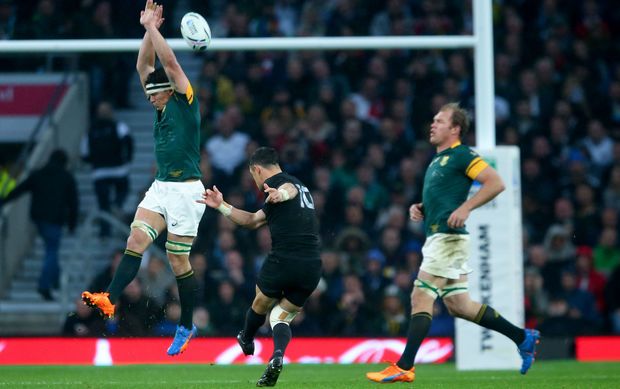 There were plenty of good bits in the All Blacks game, especially the lineout, which managed to nick a few against the throw, and for the most part their scrum was solid. Those penalties at scrum time are so 50-50, especially when you're going forward.

Sam Whitelock probably had his best game of the tournament, Aaron Smith and Dan Carter controlled things well, Ben Smith was outstanding under the high ball again, while Sonny Bill Williams made a real difference when he came off the bench.

In fact the reserves quite often have proved to be the difference for the All Blacks in this tournament and there is never any doubt that the intensity will be there.

The match reminded me of the 2011 final at Eden Park. Just a couple of tries, grim defence and a nail-biting finish.

There is little doubt that the All Blacks have benefited from that experience and have shown it in numerous games when coming from behind.

I read that the former England back Jeremy Guscott said that the All Blacks have the best brain in rugby and that proves the difference in the final quarter of a game.

Experience counts for so much, and though many felt that there were a few players in this All Blacks squad that were perhaps getting past it, it doesn't appear to be the case.

Cool heads and making the right decisions can be the difference.