New Zealand rowing may have become a victim of its own success, says six-time world champion Hamish Bond.

The sport's international governing body FISA has snubbed New Zealand rowing by failing to nominate any New Zealand-based athletes or coaches for the annual Rower of the Year award, despite the country winning five gold medals at this year's world champs.

Bond and Eric Murray also continued their unbeaten run in the men's pair, having won their last 61 races.

Bond suggests people may have got tired of seeing them win all the time.

"A little bit of fatigue (may have crept in). You're expected to win and when you are at the top, there's only one way to go, so all we can do is meet expectations. 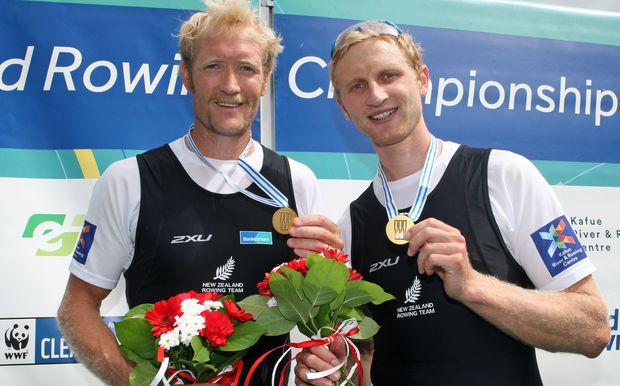 Bond said, "There are quite a few people among the New Zealand rowing team who are deserving... Gary Hay coached multiple boats to world championship titles this year."

Despite not being nominated, Bond said the snub wouldn't be a motivating factor going into 2016 and the Rio Olympics.

"Not being nominated isn't going to motivate me any more or less, and whether I get nominated is neither here nor there. What you are after when you are competing is first and foremost knowing within yourself that you have given it a good shot, and given a good account of yourself.

"Following on from that would be respect from your teammates and people who have invested a lot in you... those are the people I feel I owe something to and they are the people I want to perform well for."

Rowing New Zealand chief executive Simon Peterson said he was perplexed by the absence of New Zealand rowers as they made five nominations, including the men's pair of Eric Murray and Hamish Bond, who won a sixth world title in France last month.

Peterson said they are taking the matter up with the world body after the finalists were announced today.

"Part of what we will be seeking clarification on is the process followed by the international body. It is hard to accept given the success we have had this year both for the coaches and the athletes that we don't have finalists in those categories," he said.

Peterson said he did not know how the voting process for the awards works and that is what he will be seeking clarification on from the chief executive of FISA when he speaks to him tonight.

He said he was unsure what they could do to overturn the decision, as they had not been in this position previously.