Double world champion rowers Eric Murray and Hamish Bond have taken out the Supreme Award at the Halberg Sports Awards in Auckland. 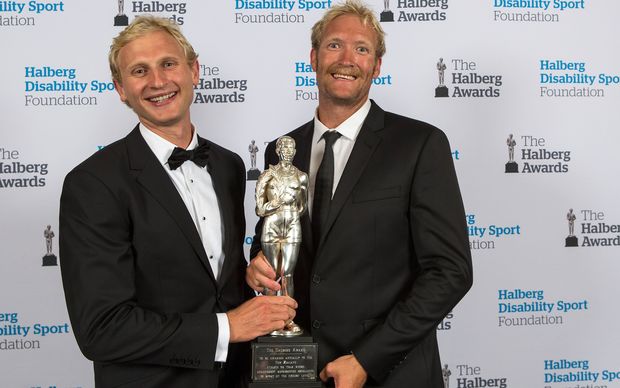 Hamish Bond (L) and Eric Murray after winning the Supreme Award at the Halbergs. Photo: PHOTOSPORT

Murray and Bond were named team of the year after another unbeaten year in the coxless men's pair and winning the world title in the coxed pair for the first time.

Bond said their willingness to go a step further than their competition in their preparation was a key to their success, and it was nice to be recognised for that.

"It's raining, it's miserable outside, howling wind, your borderline's sinking your boat, arguably unsafe - they're the rows where international competition may hum and ha and think 'maybe we won't go out today', but they are the rows that separate us from our competition," he said.

Murray admitted some members of the sporting public would have preferred the award went to a more mainstream sport, but said it was hard to compare across sports as most of what they do goes unpublicised.

"The thing is with rowing is you don't see what happens on a daily basis, and a lot of sports like rowing - we're in the media for a couple of weeks a year like the cyclists, but you don't see the time and effort that goes into it," he said.

"So many people do so much behind the scenes that you don't realise what it is."

"We're a passionate country with our sport and some people think that different sports should be on a higher level than others, but I'd hate to be judged."

Track cycling coach Anthony Peden, who guided the Men's Team Sprint to the 2014 World Championship title and a Commonwealth Games gold medal, was named coach of the year.

Dawn Jones was recognised with the Lion Foundation Lifetime Achievement Award for services to netball.