The New Zealand rowing crews have claimed another two golds and a silver at the World Championships in France. 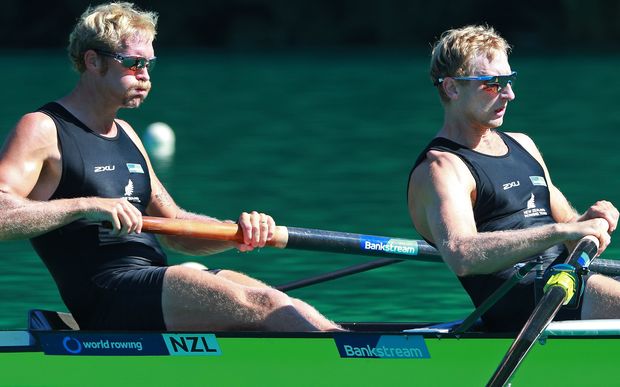 The women's quad finished sixth in their A final and the men's quad were third in a photo finish in their B final meaning both crews miss Olympic qualification this year and will look towards the qualification regatta next May.

The formidable Hamish Bond and Eric Murray worked their way into the lead to win by a huge clear water margin indicating their continued dominance in the men's coxless pair.

The duo secured their sixth consecutive title in the event in an impressive time of 6:15.83.

Bond was delighted with the race, "Really pleased that we could go out there today and execute with a rhythm that I was pleased with. It's a good time but even more satisfying than the time is just putting a good race together."

"We do it so many times in training - it's one of my biggest fears, not being able to pull it out on race day so I was really pleased with that performance."

The women's lightweight double of Julia Edward and Sophie Mackenzie successfully defended their world title producing an outstanding race pushing into the lead in the third quarter of the race and then storming home to take the win in a time of 6:53.01.

Edwards was pleased with their performance, "We're so stoked, we're double world champions now, we're very very excited - our smiles say it all. I had full confidence in Sophie going through halfway we were all pretty level but I was very confident in our last 500 metres."

"We talked about it before the race and Sophie really ramped us up and she got us going. I think it showed in the race, we took length after length so we're really rapt."

The women's coxless pair of Kerri Gowler and Grace Prendergast were composed as they moved through the United States crew into second place and hunted down the reigning World and Olympic Champions from Great Britain.

The New Zealanders were back in contact with Great Britain in the final stages of the race and crossed the line in clear silver medal position.

Prendergast said, "It went so quickly but we're really happy, we had a good race, that's what we wanted to go out and do. It's been a really awesome season and stepping up to elite racing has been a big challenge but I think we've done it pretty well."

"Once we recover we'll be ready to go out and give our best tomorrow in the eight."

Prendergast and Gowler will race the in the New Zealand women's eight on Sunday night with the hope of gaining a top five finish in order to secure an Olympic qualifying spot.

Erin-Monique O'Brien, Lucy Spoors Georgia Perry Sarah Gray were right in the mix in the women's quad early on but slipped off the pace through the middle of the race finishing in sixth position and short of the top five finish they needed to qualify for the Olympic Games.

The New Zealand men's quad of John Storey, George Bridgewater, Jade Uru and Karl Manson fought hard for top two finish in the B final in order to qualify for the Rio 2016 Olympic Games but were on the wrong side of an agonising photo finish that meant they took third place behind Poland and Ukraine.

Rowing New Zealand will now look towards the European and Final Olympic Qualification Regatta in May 2016 for the unqualified boats.

In the C finals the men's lightweight double had a convincing win giving them an overall placing of 13th at the regatta.

The men's four and women's single both finished fourth in their C final giving them an regatta ranking of 16th.

Racing kicks off with the women's double up first at 11:15pm (NZ time).