World Rugby chiefs are "working well" with organisers of Japan's troubled 2019 World Cup, and there is no 'Plan B' to award it to another nation. 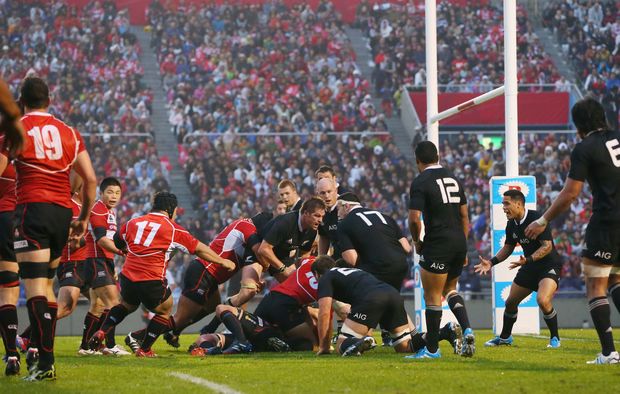 The All Blacks playing Japan in Tokyo in 2013. Photo: PHOTOSPORT

President of the sport's governing body Bernard Lapasset has played down Japanese concerns, saying his body was confident it could work with Japan to deliver a successful event, despite recent setbacks.

There were reports in South Africa last month that their Rugby Union had been asked to be on standby to take over the event if necessary.

"Japan 2019 was difficult for us with the stadium, but now we are confident working with them," the Frenchman told reporters at Twickenham Stadium, ahead of this week's start of the 2015 World Cup.

Japan's plans to host the 2019 edition were thrown in disarray in July when Prime Minister Shinzo Abe scrapped plans for a proposed new stadium.

Costs for the new National Stadium, which was to be the centrepiece of the 2020 Tokyo Summer Olympics as well as the venue for rugby's World Cup opening game and final, soared to $US2.1 billion, nearly twice the original estimates.

That inflated price tag sparked widespread outrage and prompted Abe to abandon the design, meaning any new stadium would not be ready in time.

Japan 2019 organisers have earmarked the Tokyo Stadium as a replacement but the 50,000-capacity venue may not be an ideal choice for World Rugby.

The final of the upcoming World Cup in England will be played in London's 82,000-capacity Twickenham Stadium.

Lapasset said meetings were scheduled for later this week, and that alternatives were not on the table.

"Plan B? That is the wrong message," he said. "We have no Plan B for 2019. We are very confident of working with Japan. It is four years to go now, and time to complete the process.

"The stadium was a big change, but now we progress to resolve this. There is no Plan B and (there has been) no contact with any other country."

World Rugby last month said it would give Japan until the end of September to provide 'formal reassurances' on key points, following the loss of the stadium.

The request prompted many observers to speculate that the global governing body could be considering an alternative host nation, with South Africa and Australia among front runners.

However, for World Rugby to take the tournament away from the Japanese would spell a very last resort - one which Lapasset says is not being considered - largely because it formed a part of a global expansion plan to take rugby into new territories.