Reports in France say the Wallabies first-five Quade Cooper will join Toulon on a two-year deal from next season, as European rugby continues it's raid on southern hemisphere playing stocks following this year's World Cup. 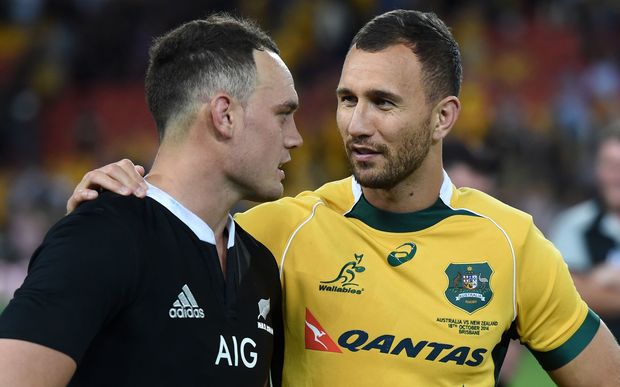 The All Blacks Israel Dagg and the Wallabies Quade Cooper. Photo: PHOTOSPORT

The Queensland Reds playmaker will quit Super Rugby to join the reigning French and European champions having spent the weekend in the south of France.

Cooper was on hand to watch Toulon make their third successive European Cup final in Marseille on Sunday, and L'Equipe are now reporting that he has signed a two-year contract.

It's the latest in a string of big name signings for the French side, with Mourad Boudjellal having hinted at the move over the weekend.

Cooper will join the likes of Ma'a Nonu, Samu Manoa and Napolioni Nalaga next season, while Duane Vermeulen has also reportedly signed.

And Toulon might not be done there, with reports emerging this morning that Irishman Paul O'Connell could also be on their radar.

Toulon are currently top of the Top 14, and will play Clermont in next weekend's Champions Cup final as they seek a historic third straight title.

Cooper's departure is the latest big blow for the Reds, who have already lost James Horwill and Will Genia to European deals next year.