The All Blacks will be fine without first-five Aaron Cruden at this year's World Cup in England. 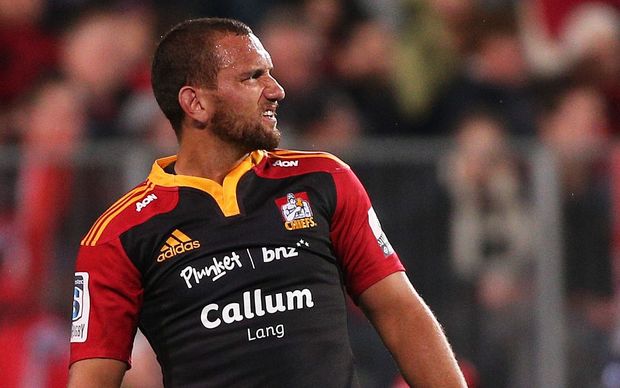 Aaron Cruden leaving the field injured during the Super Rugby game between the Crusaders and Chiefs in Christchurch. Photo: PHOTOSPORT

Cruden is out of action for at least six months with a knee injury - so who is the front-runner to be the All Blacks number ten as they defend their title in England in September and October?

There is little doubt that Cruden was set to guide the All Blacks backline this year.

He started eight of the All Blacks 14 tests last year, while Barrett started five and Carter one.

Cruden had taken the mantle of the All Blacks first-five and looked set to hold the position for some time, with Carter heading overseas and Barrett still gaining confidence and maturity in the position.

In reality, Cruden became the go to man after he came to the rescue of the All Blacks in the later stages of the 2011 World Cup.

All of a sudden he was showing signs that he had the potential to take over from Carter and take hold of the All Blacks number ten jersey for the foreseeable future. He played 11 Tests in 2012 and nine in 2013.

The feeling many fans had in recent years that the All Blacks were going to be okay without Carter, is now working in reverse. Cruden is gone, but we've still got Dan!

When Carter signed a four-year deal with New Zealand Rugby in 2011 he wasn't actually sure, he said, whether he'd still be playing in 2015.

He may not be the same player he was four years ago remains the key figure in the side.

The 33-year-old was hugely disappointed he didn't get the opportunity to guide the All Blacks through to their 2011 success, but it now appears he'll get the chance to play a starring role in this year's World Cup campaign.

Some sceptics have suggested he's not controlling a game like he used to, but I don't think we can be too critical of his performances with the Crusaders so far this season - he's part of a team that is struggling to play to their best.

He still has the skills and vision that will help those around him, while his goal kicking remains quality, and, as we know, that can win a World Cup.

Carter is the best defender of New Zealand's top four first-fives - the others being Cruden, Barrett and Colin Slade. He is the heaviest of the quartet which could prove vital in potentially wet and boggy British conditions.

I don't expect him to start every game at this year's World Cup, but I feel he's the best man to start the key games.

While he has certainly gained in confidence and ability, for me Beauden Barrett still appears to be best coming off the bench to finish off a game.

The All Blacks tend to finish off a team in the last quarter and Barrett is the best guy to spark that.

His defence and decision making ability is also still a tad questionable.

Slade has now moved up to number three in the first-five standings.

We probably don't need look any further than that just yet, even though we did need four of them to win the Cup four years ago.