Defending champions Auckland City are one step closer to the Oceania Champions League football semi-finals after claiming a 3-0 win over the Solomon Island's Western United in Suva. 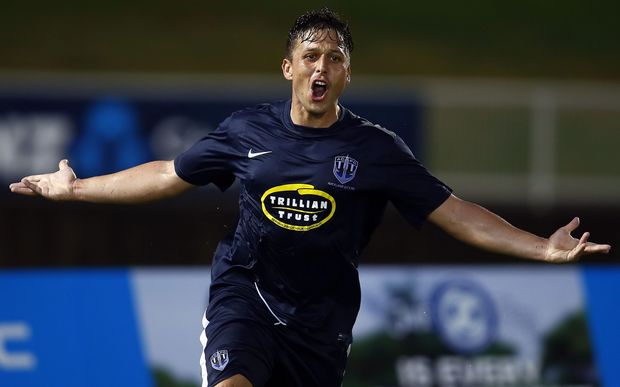 Three second half goals including two from Darren White and one from Gustavo Souto set the Navy Blues up for their second consecutive win of the competition but the victory came at a cost.

Influential forwards Oscar Garcia and Ryan De Vries were both lost to injury either side of the break, injuries that deplete the defending champions forward stocks ahead of Saturday's clash with Vanuatu club and last year's finalists Amicale.

Western United contributed much to the competition with Benjamin Totori and James Naka at times breathtaking in possession but despite their at times dazzling skill on the ball neither could find a way past goalkeeper Tamati Williams.

The Solomon Island champions matched Auckland City FC in an evenly contested first half but over the course of the 90 minutes failed to penetrate a defence that has now gone 270 minutes without conceding a goal.

With Auckland City FC now on six points and Amicale yet to face Suva in a match the Fijians must win to have any hope of qualifying for the last four, coach Ramon Tribulietx cannot afford to relax with only one team guaranteed a berth from each group.

Two goal hero Darren White described the match as the most difficult so far.

"It was very tough, the match was back and forth and Western United's players are so quick you have to concentrate all the time."

"We stuck to our game plan kept the ball moving the way we wanted it to move and got the win," he said."

White, who began the match at right back, was shifted up front following the departure of De Vries.

"We knew late on in the game the gaps were going to open up and I found myself in space and luckily for my second goal the ball from Gus was spot on.

"I've played right wing before so I was quite stoked to be put up front and to score two goals and get the win topped it off," White said.

Auckland City FC's next match is against Amicale at ANZ Stadium, Suva, Fiji, on Saturday at 7pm (NZ time).

Team Wellington, who are making their debut in the competition, also won their first game.