Chief executive Dave Smith says the National Rugby League will come down hard on rugby league fans at the centre of the ugly scenes that marred the finish of the controversial Good Friday clash between Canterbury and South Sydney. 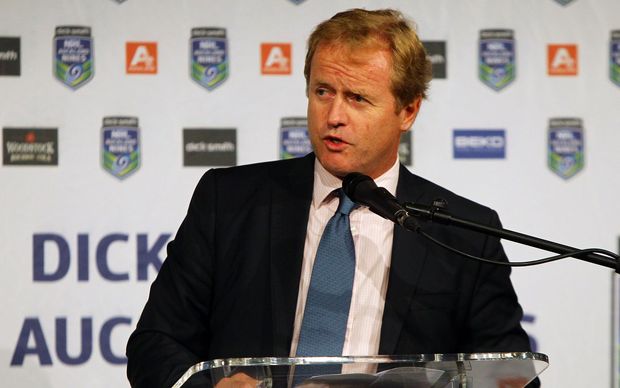 Two men were charged with assault over separate incidents at ANZ Stadium, while those fans who showered officials with bottles following Souths' 18-17 win are facing a life ban from the NRL.

Officials had to run from the field for cover and afterwards sideline interchange official Darren Alchin was taken to hospital with a broken shoulder blade after slipping over in an attempt to avoid a bottle thrown from the stands.

Smith wrote on Twitter "The scenes at ANZ were disgraceful. There is no place in the game for behaviour like that EVER. Expect a strong response where it's due."

How the issue is dealt with, including Bulldogs' captain James Graham's and interchange prop Dave Klemmer's exchange with referee Gerard Sutton after he awarded Souths a late penalty, will be a big test of Smith's administration.

That's come under constant criticism for its inconsistent handling of some of the game's biggest issues, including player misbehaviour.

Klemmer was sin-binned for swearing at Sutton, a decision backed by NRL head of football Todd Greenberg.

Both Graham and Klemmer could face contrary conduct charges under the NRL's code of conduct.