The Warriors back rower Ben Henry has suffered a season-ending injury for the second time in less than two years after rupturing the anterior cruciate ligament in his left knee in last Sunday's loss to Brisbane at Mount Smart Stadium. 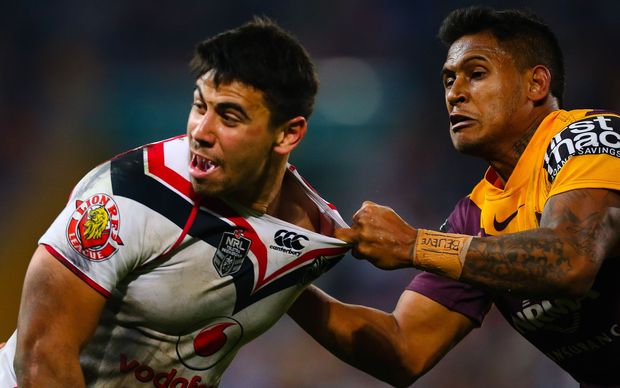 Warriors Second row Ben Henry (L) is tackled by Brisbane Full back Ben Barba (R) during the round 19 NRL match between the Auckland Warriors and the Brisbane Broncos at Suncorp Stadium, 2014. Photo: PHOTOSPORT

The 23-year-old had been on the field only eight minutes when he was helped off after injuring the same knee he had surgery on after a training field mishap in 2013.

"It's devastating for Ben and for everyone at the club. We all feel for him," said head coach Andrew McFadden.

"After missing most of 2013 Ben has to go through another knee reconstruction. It hits everyone really hard but we'll give him all the support and care we can."

Rapira, Ken Maumalo (hamstring), Fisiiahi and Fusitu'a are on target to return soon while Ngani Laumape made a successful comeback from a knee injury for the club's New South Wales Cup side last week.

The injuries have forced McFadden to make changes to his side again.

Laumape and Sebastine Ikahihifo will make their first NRL appearances of the season while back rower Ryan Hoffman celebrates his 250th game against his old Melbourne side in next Monday's fifth-round clash at AAMI Park.

Laumape comes into the centres while Ikahihifo has been called in to Henry on the bench.

While Hoffman provides the milestone focus for this match, veteran wing Manu Vatuvei chalks up his 199th appearance leaving him set for his 200th when the team returns home to take on Wests Tigers at Mount Smart Stadium on April 11.

Only Stacey Jones (261) and current captain Simon Mannering (216) have so far played 200 games for the Warriors.