The Commonwealth Games gold medallist Sam Webster has won the men's sprint title at the Track Cycling Nationals in Cambridge. 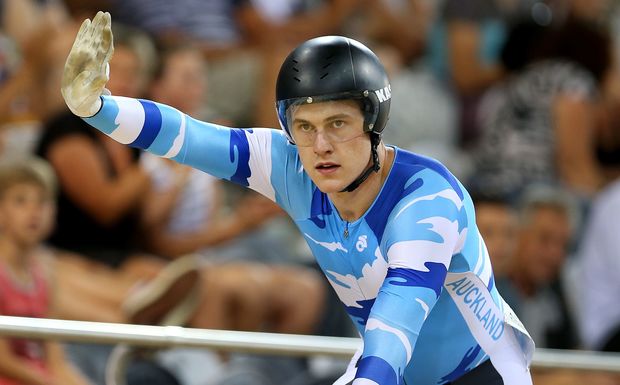 Webster was pushed to a third race decider against world champion team-mate Eddie Dawkins, prevailing after he jumped early with a lap to go and held on for the victory.

With the world championships looming in Paris next month, selectors would also be pleased as other key hopes showed strong form.

Individual pursuit champion Jaime Nielsen claimed her first bunch race, lapping the field to set up victory in the points race ahead of fellow national squad members Racquel Sheath and Rushlee Buchanan in a Waikato BOP sweep of the podium.

Young Canterbury hopeful Alex Frame signalled his intentions with a burst on the final lap sprint to win the men's scratch race ahead of Dylan Kennett, reversing their placings from yesterday's individual pursuit final.

Webster has won all three major events where he has been pushed to a final third race - at the UCI qualifying event in September, the Commonwealth Games and the nationals final.

"None of us is going to give away rides so you have to fight tooth-and-nail for wins. I am happy with how I am riding recently and my mental game has helped me through a lot of these times," Webster says.

"I am developing that mental toughness and resilience repetitively and really put it out on the track. I am happy with how the mental side of things are at although I am a little disappointed with my qualifying ride this morning."

Qualifying was owned by the Commonwealth Games medallists Eddie Dawkins and Matt Archibald who both went under the magical 10 second barrier in the men's sprint, while London Olympian Natasha Hansen was back to her best to top heats in the women's sprint.

Dawkins showed he is close to his best with his morning qualifying performance and pushed Webster to the limit in their three-race battle for gold, while Archibald recovered from a fall in the opening race to claim third ahead of Ethan Mitchell.

McKenzie proved too strong in two close races over Hansen for the sprint honours, with Otago's Katie Schofield dominating her race for third.

"The racing was so much closer out there today and it was a real race out there," McKenzie says.

"There was a bit of touch of the wheels but you have to toughen us up a bit."

"Hopefully I've done enough for selection but I still have to show what I can do in the keirin and team sprint, so there's still work to do."