The Black Caps all-rounder Corey Anderson says the bowlers and opening batsman Brendon McCullum deserve the bulk of the credit for guiding New Zealand to a win in the first one-dayer in Christchurch. 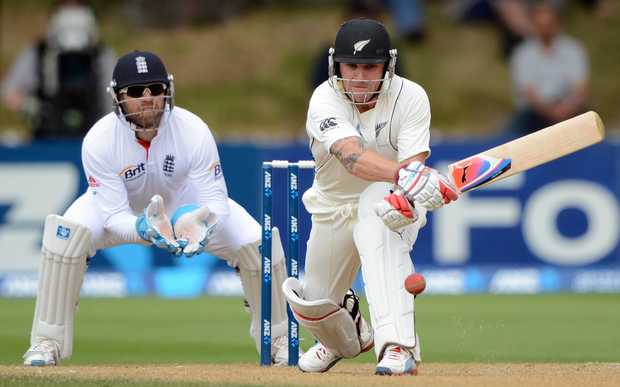 Anderson scored a composed 81 as the Black Caps reached the victory target of 219 with seven overs to spare, to take a 1-nil lead in the seven match series against Sri Lanka before next month's World Cup.

The 24-year-old Anderson strode to the crease with New Zealand 77 for four at Hagley Oval and steadied the innings in a 48-run partnership with Luke Ronchi after captain McCullum got his side's run chase off to a blistering start with a 19-ball half century.

Anderson says the Black Caps bowling attack, which restricted Sri Lanka to 218, and McCullum's rapid-fire knock, set up the victory for New Zealand.

"It was pretty pleasing to know our bowlers had done the job and I guess the way Brendon came out of the gates it put us well ahead of the game so I think those wickets that we lost didn't really affect us as much as what they potentially could have if we had a slow start so I think we were always ahead of the game."

Anderson says top scoring in the three wicket win also lifted a weight off his shoulders.

Anderson had been struggling for form at international level and he says it's nice to get some runs on the board and the monkey off his back.

"I guess I've lacked a little bit of form with the international stuff and I feel like the last time I played was probably about three weeks as well. So yeah it's nice to be out in the middle for a period of time and I guess not have that pressure to have to go after it or make a massive play it was easy to I guess stick to a tempo and try and take it as deep as we could and yeah it was nice to cross the line."

The second ODI is in Hamilton on Thursday.