The Wigan Athletic chairman Dave Whelan has been banned from all football activity for six weeks and fined $100,000 by the English Football Association for making derogatory and racist comments. 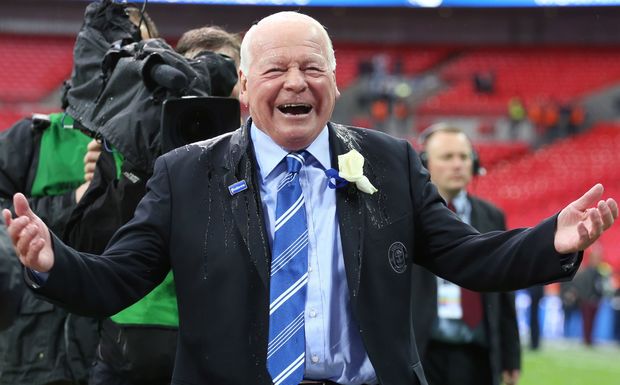 The Wigan Athletic chairman Dave Whelan laughs as he is soaked with champagne. Photo: PHOTOSPORT

Whelan gave an interview to the the English newspaper the Guardian last month in which he referred to Chinese people as "chinks" and said Jewish people "chase money".

The 78-year-old accepted a charge of improper conduct but denied making racist comments.

"It was alleged Mr Whelan breached FA Rule E3 in that comments made to the media were abusive and/or insulting and/or constituted improper conduct and/or brought the game into disrepute," the FA said in a statement.

"It was further alleged that this was an 'Aggravated Breach' as defined by FA Rule E3 as it included a reference to ethnic origin and/or race and/or nationality and/or religion or belief."

The FA Disciplinary Commission said it was satisfied that Whelan was not a racist and did not mean to cause offence by his remarks.

Whelan, who has also been ordered to undertake a mandatory education programme, was defending the appointment of Malky Mackay as manager of Championship (second tier) club Wigan when he made his controversial comments.

Mackay is under investigation for sending allegedly racist text messages when he was manager of Cardiff City.

Whelan's punishment is suspended until after the outcome of any appeal.

He said recently that he would resign as Wigan chairman if he was charged by the FA.