A double from second half substitute Tyler Boyd has guided the Wellington Phoenix to a 3-1 win over Adelaide United in their A-League football clash in South Australia. 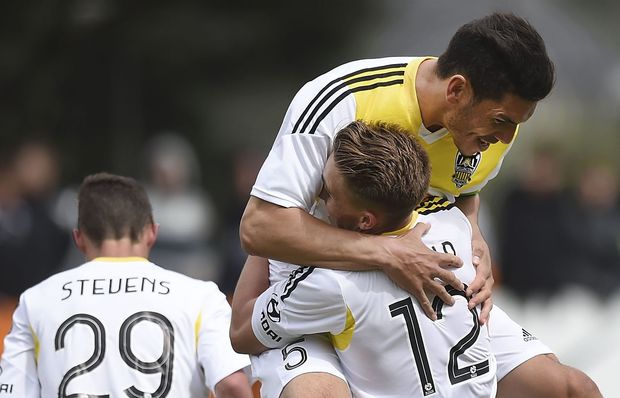 The Phoenix spoiled the Reds New Year's Eve party in front of 10,060 spectators and the win means Wellington leapfrog Adelaide into third place where they sit two points clear of the Reds.

Kenny Cunningham had put the visitors in front early in the second half and Sergio Cirio equalised for United, before Boyd starred with two goals off the bench.

United were forced to make a host of changes with skipper Eugene Galekovic on Socceroos duty, Nigel Boogaard and Tarek Elrich missing through suspension, and star playmaker Marcelo Carrusca ruled out through injury.

Wellington were without A-League top scorer Nathan Burns, who also joined Galekovic for the Asian Cup, and Fijian international Roy Krishna, who is nursing a hamstring injury.

But it was United who looked most comfortable in the first half, despite missing four regular starters.

The Reds dominated proceedings and enjoyed a host of chances with Awer Mabil, Pablo Sanchez and Cirio threatening in the front third.

Mabil had the best chance of the opening 45 minutes, cutting through the Phoenix defence with a mazy run on the quarter hour and unleashing a shot from the edge of the area which beat keeper Glen Moss but rebounded off the upright.

Two minutes into the second half and United hit the post for a second time with James Jeggo's corner flicked on at the near post, looping onto the cross bar and bouncing on the goal line before it was eventually cleared by Wellington's defence.

The home side continued to pepper the Phoenix goal but it was the visitors who broke the deadlock against the run of play in the 55th minute.

Roly Bonevacia split Adelaide's defence leaving Jeremy Brockie bearing down on goal before the striker appeared to tangle with a pair of United defenders inside the area.

Players paused for a second, waiting on a decision from referee Kris Griffith-Jones, while Brockie, laid on the deck, fed a pass to Kenny Cunningham who made no mistake from 10 metres.

The goal gave Wellington confidence and they looked to be gaining the ascendancy but the Reds levelled the scores on 72 minutes thanks to a tap in from Cirio after Mabil danced through the Phoenix back four and supplied the cut back.

Tempers flared moments later when Sanchez and Manny Muscat clashed on the touchline with coaches Josep Gombau and Ernie Merrick joining in and exchanging words.

But it was Merrick who had the last laugh when Tyler Boyd put the visitors 2-1 up in the 77th minute, picking up a stray pass from Reds defender Cameron Watson and firing past Paul Izzo.

Boyd sealed the win with his second deep into injury time after the Reds had pushed Izzo up the field to attack a last minute corner.

Wellington struck on the counter and Boyd was left unmarked and slid his shot under Izzo as the replacement bagged a brace of goals to seal the result.