The first unmanned helicopter certified to spray chemicals in New Zealand could ultimately save back-country farmers thousands of dollars but it comes with a hefty price tag - and a safety warning. 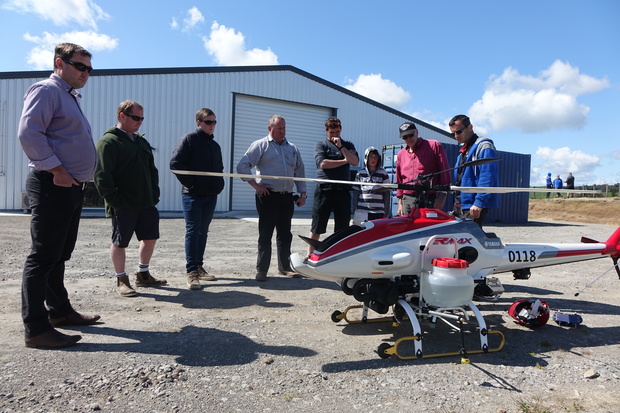 The Yamaha RMAX is a beast by drone standards, powered by a 260cc engine and weighing in at close to 100 kilograms.

Yamaha business development manager Geoff Lamb and his team put the chopper through its paces for a gathering of curious farmers, spraying contractors and radio-controlled aircraft enthusiasts at a Lepperton farm in Taranaki this week.

Mr Lamb said the RMAX was not an off-the-shelf toy suitable for hobby buyers.

"Obviously it's a helicopter; it's got spinning blades. There's been some injuries overseas and one guy in South Korea killed himself using this machine because he was standing too close when he took off.

"The rules in New Zealand are a lot more stringent so we make sure we are at least 30 metres away from the machine at all times." 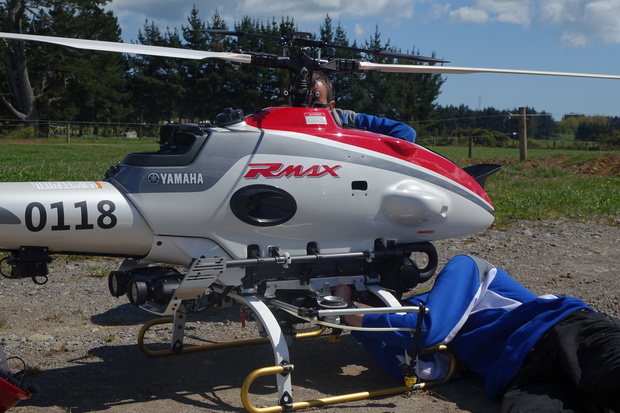 Members of the Yamaha team get the RMAX drone ready for takeoff. Photo: RNZ / Robin Martin

Last month, the RMAX, which has a payload of 28 kilograms, became the first unmanned helicopter to get Civil Aviation Authority (CAA) certification for commercial use.

Mr Lamb said its potential market in New Zealand would be existing spraying contractors and people who saw an opportunity to get into the business - but, at $160,000 a pop, the aircraft was not cheap.

"It was designed in Japan for agricultural work [so] it's bigger, heavier, a little riskier and can carry a lot more load. It's a farm machine, a tool.

"It's got specific jobs that it will do well: working on steep hillsides, deep gullies and that kind of area where you can't get to on foot or on a quad bike." 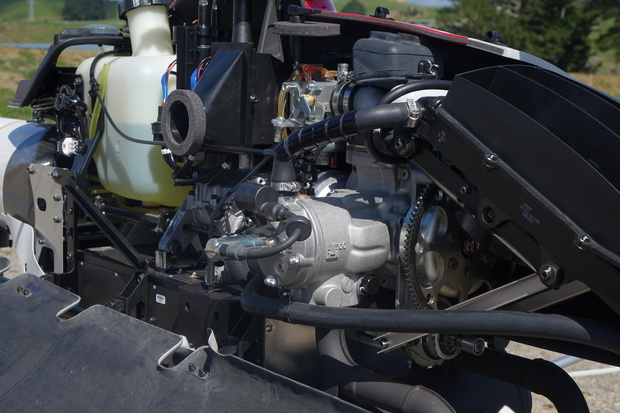 The RMAX requires two people to fly it - an operator, and a spotter who helps navigate the machine via a radio hook-up with the operator.

It can stay in the air for up to an hour, is restricted to a speed of 20 kilometres per hour and can safely be operated over a range of about 400 to 500 metres.

Mr Lamb said he did not expect to find Yamaha's unmanned helicopter buzzing commercial aircraft at 6000 feet, as a drone was reported to have done earlier this week.

He said the RMAX could only travel to 4000 feet before the thinness of the air would make it impossible to fly, and it would also lose radio control at about 2000 metres. 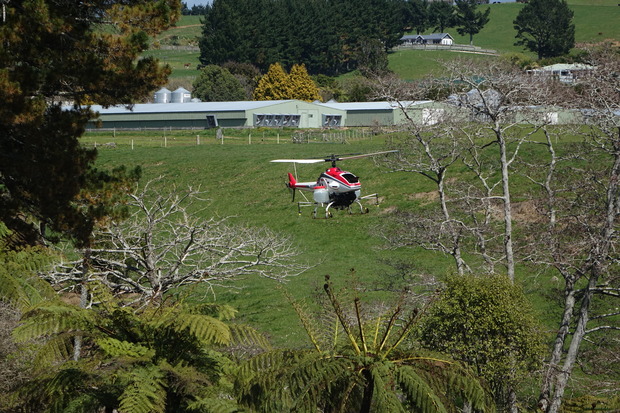 Mr Lamb said, however, due to the machines' power, potential buyers would be carefully scrutinised and have to undergo three weeks of training.

"We have very stringent background checks - so if anyone is interested in buying one, we will make sure they are not on any bad guys' list.

"The Japanese government is especially interested in making sure these don't go through any backdoor channels to countries we don't want them to be in."

CAA flight operations inspector Mark Houston, who was on hand for the demonstration, said he could not imagine the machines being misused or falling into the wrong hands.

"Especially as a working machine, it's got quite a specific task to do so it will operate in quite confined areas," he said.

"And also, interestingly, Yamaha are quite strict in their operating rules for each of the operators - hence the training courses that people have to go through to actually operate one." 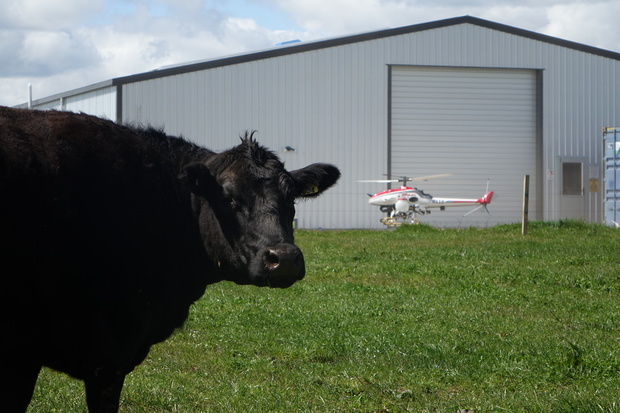 A local cow barely notices the drone touch down after completing its demonstration flight in Taranaki. Photo: RNZ / Robin Martin

East Taranaki sheep and beef farmer Will Hopkirk, meanwhile, said he could see the helicopter's potential.

"Some of the spot spraying and stuff we do at the moment is pretty labour intensive and this offers the opportunity to cut that down a bit," he said.

But Mr Hopkirk did not expect to be buying one of the super-drones anytime soon.

"I would imagine some of the helicopter companies around will start running these as follow-up machines doing follow-up spraying work to large numbers of people.

"I can't really envisage me spending that sort of money on one for personal use."

Mr Lamb said Yamaha believed there was scope to have about 30 to 35 of the machines running across the country.