Well it's official New Zealand has been fleeced by the Australians ..who now hold the world record for the heaviest fleece shorn off a merino.

The Australians were quick to yell they had found a wild merino near Canberra in early September with a fleece which weighed in at 40 kilograms. 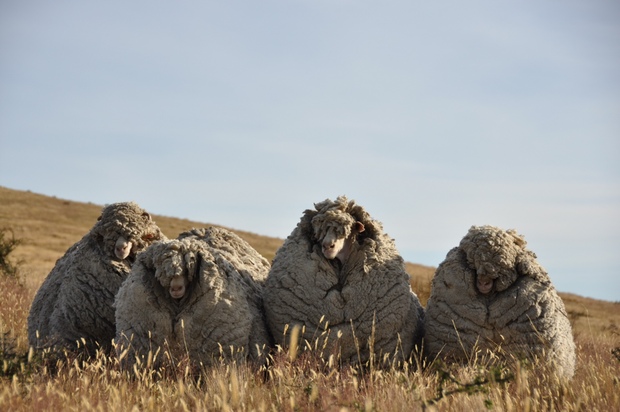 Big Ben (right) was one of four sheep captured after five years at large. Photo: SUPPLIED

Otago's 'Shrek the sheep' held the record up until last year when another wild merino - dubbed Big Ben - was found in the Mackenzie Country with a fleece weighing 28.9 kgs.

Guinness World Records has confirmed the Australian merino called Chris, now holds the record for the heaviest fleece at 41 kilograms.

"At least we've got this one over you...it came in at 41.1kg. It certainly outstrips or fleeces your two previous Big Ben and Shrek," Michael Cavanagh, a rural reporter with the ABC said.

He said Chris the sheep was "living the life of Riley."

"There was concern when they sheared it, they had to give it partial sedation which made it interesting for Ian Elkims, who's been a world number one shearer. At the time he said, 'it's a bit hard shearing a sheep that's a little bit floppy and doesn't actually brace against you'.

"It's living on a hobby farm outskirts of Canberra being very well looked after indeed.

He said the fleece had been taken to the national museum in Canberra.

"They're treating it, they're freeze drying it and getting rid of all the dags and what have you and then they're going to preserve it and mount it.

For a while it will be at the animal welfare centre, the RSPCA, which first took the delivery of Chris the sheep, and then it's going on a road trip around Australia to help raise funds for the RSPCA.

And when you think about that size - we'll hopefully be able to come up with a case that will be almost as big as the Bledisloe Cup, which is not something we see too often around here."

Big Ben's owner Michael Lindsay yesterday said they still had his fleece..and were hoping to sell it to raise funds for a new medical centre in Twizel.

He said Big Ben had sadly since died.