A judge at last night's Beef and Lamb Steak of Origin awards says New Zealand farmers are doing a fantatsic job of producing great tasting beef - but need to be very careful about who's processing their stock. 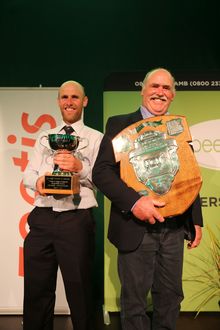 Forbes and Angus Cameron, who farm at Ashhurst in Manawatu, won the supreme award last night at the 2015 Steak of Origin Grand Final with their angus sirloin.

Food writer and New Zealand Listener columnist Lauraine Jacobs was involved in judging the top 20 final steaks and said it was a priviledge.

"What we were looking for, is we were looking to see the flavour the smell, but we also looked at the suculence how juicy they were, what was the taste like and put that piece of steak in your mouth and see if the flabour goes on and on and the winning ones just stood out.

"The farmers are from Ashhurst and they are actually former winners of the Glammies compeition too, where the best lamb is judged so these farmers must be doing something amazingly well on their farm."

Ms Jacobs said a lot of what makes great tasting meat comes down to farm management.

"The other thing that's key for farmers to recognise is when they've raised the meat to the point where it is going to be processed, they're very careful about where it is processed and who processes it.

"And how well those animals are looked after between the gate and the processing plants.

"And then once again, once the meat has been processed it might go into the retail chain and making sure that it isn't absolutely fresh that it's been, for about two weeks, aged, and allowed to relax and become the meat that we're all going to enjoy," she said.