New Zealand maize growers fear the increasing amount being imported is a threat to the country's biosecurity. 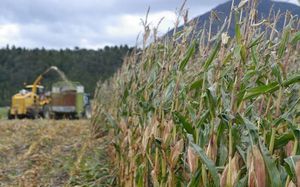 A total of 80,000 tonnes of the cereal, which is used in stock feed, has been imported in the past six months from countries such as the United States, France and Bulgaria.

Maize growers say they have the same concerns that farmers had about contaminants in imported palm kernel extract.

North Island maize grower Colin MacKinnon said there were diseases in the US, for example, that would cause a major problem if they were to arrive here.

"We believe that there are significant biosecurity risks in importing large tonnages of feed ... from countries which definitely have their own biosecurity or disease risks.

"So you bring in palm kernel - I think there's over two and a half million tonnes brought in - so over those huge big tonnages I would suggest that the risk does become higher."

The Ministry for Primary Industries said grain was inspected for pests and diseases by the exporting country before it was shipped, and it was also strictly inspected and monitored on arrival in New Zealand.