The competition dubbed the 'Wimbledon of shearing' entered a new era at the weekend with the retirement of legend David Fagan and its first ever international winner. 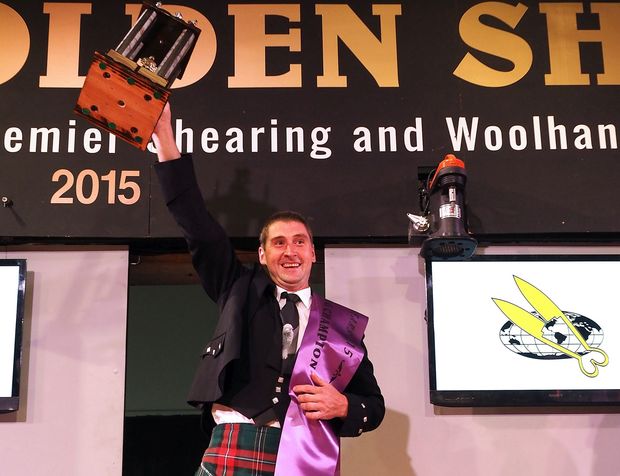 Fagan, the long-standing champion, has 16 Golden Shears wins under his belt, but in the year of his retirement he did not make the final of the open event on Saturday.

Instead, he ended his 35 year career in the semi-finals, leaving the Masterton crowd to witness something the competition has never seen before in the 55 years it has been running.

In front of a full house of 1600 people, plus another 40,000 around the world who watched a live stream of the event, the Scottish national anthem rang out for the first time.

Scotsman Gavin Mutch, who now farms in Whangamomona in the King Country with his family, was initially lost for words at his win.

"It's been a long route to get here, but it feels really good. Hopefully it's the start of a new era," he said.

Mutch has made the Golden Shears open final six times, gaining two fourth places and he took out the World Championship title in Masterton in 2012.

The shearing world, until now, has been dominated by the man from Te Kuiti, David Fagan.

In his career he won 16 Golden Shears titles, was crowned New Zealand champion 16 times, took out five world championships and notched up about 640 shearing wins in the open grade.

"From then on in, it was a change in our shearing career, it was the era when we became professional. It was no longer good enough for champions to go out into the woolsheds, shear all day, shear all week and come to the competitions in the weekends thinking they were going win.

"David Fagan put in the extra miles, he set a precedent. He trained, he ran, he went on a special diet, he went to the gym - and to even get near him, you had to do the same thing," Mr Herrick said.

For the first time in years, three of the finalists were rookie newcomers.

In the meantime, the accolades may not be over for Fagan. The Golden Shears World Council wants him to be inducted to the New Zealand Sports Hall of Fame at the 2020 Halberg Awards, which he has to be retired for five years to qualify for.