Biosecurity officials are raising a bit of a stink about a voracious bug that could cause havoc with fruit and vegetable crops if it gets loose here. 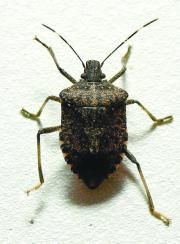 The Ministry for Primary Industries has scaled up treatment requirements for vehicles and machinery coming from the United States because of more frequent discoveries of the brown marmorated stink bug on these imports.

The stink bug originated in Asia, notably China, Japan, and Korea but has now invaded the United States where it is causing huge losses to crops.

A senior biosecurity risk assessment adviser Catherine Duthie said the bug has the potential to seriously damage the horticulture sector in New Zealand too.

There were more than 300 plant species that were known as hosts, including apples, stone fruit, grapes, kiwifruit, citrus and a range of vegetables.

"At the moment in the US they're struggling with chemical control of the stink bug. They did have some very good integrated pest management programmes, where they use natural enemies to control pest levels, but with the arrival of the stink bug in the States, they went from spraying chemicals twice in a season to having to spray twice weekly, and they're still suffering up to 40 percent crop loss," she said.

Under the new biosecurity rules, all vehicles, machinery, boats and parts imported from the United States now have to be heat treated or fumigated with methyl bromide before being shipped here.