The discovery of a pest posing a threat to tree health has led to the first response under the Government's new approach to biosecurity. 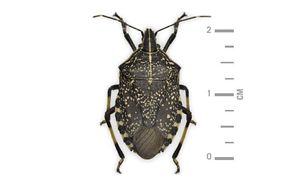 A single unmated female yellow spotted stink bug, which could threaten apple and pear orchards, has been found in a garden in Temuka in South Canterbury.

It is a larger, browner version of the green shield bug, which is often found in vegetable gardens. They are up to two centimetres long and brown, with fine yellow spots and a stripe up the middle.

The Ministry for Primary Industries believes the pest came in alone on a container from Asia.

The response to the discovery is the first under the new Government Industry Agreement approach to joint biosecurity which is a partnership between the Ministry for Primary Industries and the industry itself.

Mike Butcher, Pipfruit New Zealand's technical manager for market access and regulatory affairs, said it was got off to a good start:

"I think MPI and industries involved are working very well together and it's showing that we can work together because we do have common interests in biosecurity."

Dr Butcher said if there are any more yellow spotted stink bugs found it could mean trouble for growers.

"Potential impacts on particularly tree health. Insects that feed on a wide variety of plant species and can under certain circumstances build up to numbers that can cause ill thrift by feeding on the sap of trees and basically weakening the tree.

"It's not considered to be a fruit pest - but certainly a pest of especially flowering trees, hardwoods. It is known from apple and pear orchards as an occasional problem in China."

Dr Butcher said they now need the public to help make sure there were not any more of the bugs found.

"We're going to try and encourage what's called citizen science and that's getting the locals out checking their gardens - because if there are any more out there we really do need to know.

"It's quite a distinctive bug - just its size will make people think it's different and the fact that it's brown with fine yellow spots or dots. It won't bite people."

If anyone sees one they should catch it, put it in the freezer to kill it humanely, and then contact the ministry, he said.