Nor'west winds and weather patterns are being labelled a curse by farmers in the Otago region - bringing too much rain for some and not enough for others. 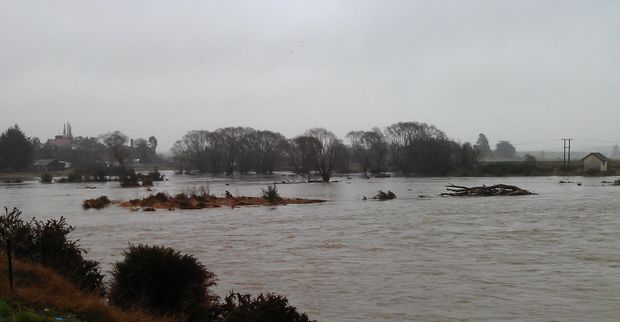 The Kakanui River - pictured in flood in 2012. Photo: RNZ

The Otago Regional Council said it was keeping a close eye on rivers throughout the region, including the Shag, Kakanui and Taieri as levels steadily dropped.

Hydrological consultant Dave Stewart said in contrast to the dry spell in Central and North Otago, South and West Otago farmers, like those in Southland, were struggling because it had been so wet.

"In the areas where it was cold and wet, the wind just added to the misery and in North and Central Otago, the wind just helped dry things out a lot.

"Why we have such a contrast in these two areas is that we had a lot of westerly quarter winds and that's from the north-west through to the south-west.

"Areas that are around the southern lakes - South and West Otago almost up as far as Dunedin Airport - can get hammered by weather systems coming in from the westerly quarter, whereas the areas in North Otago and Central Otago are sheltered from that and so they hardly get much rain at all."

Mr Stewart said he would not be surprised to see water restrictions in force within the next month.

Meanwhile, farmers in Northland's Hikurangi Swamp hoped they were not going to get more rain at the weekend, adding to the downpour earlier in the week that threatened flooding for the fourth time in a year.

However, rain this week brought relief to farmers in Hawke's Bay, who said it came just at the right time to save crops and clover.