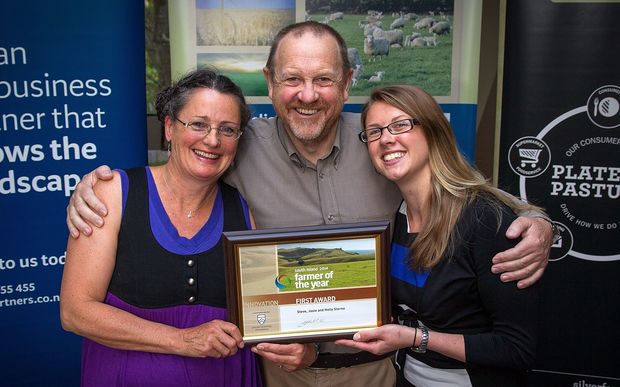 The farm has 3500 breeding sows and provides 15 percent of this country's pig meat, with an annual turnover of $25 million, is run by Steve and Josie Sterne and their daughter Holly.

The judges said the business had impressive growth, technical excellence, efficiency of production and strategic focus.

Steve Sterne said the past 16 years had been a lot of hard work, but was very rewarding.

"There is certainly a strategy involved in the way we have developed and the things we have done, but I also have to acknowledge the input of a wide variety of people particularly my business partner who worked with me for 14 of those years. They were pretty instrumental in developing that strategy.

"I think pigs for me was probably because I saw it as a means of being able to acquire and develop the capital needed to get into farming. I didn't come from a farming background, so I needed an industry that was fast growing, had a strong cash flow and reasonable margins that would allow me to be able to actually own and run a farm given the capital requirements that that demands."

"We have certainly had our battles with a lot of negative publicity and I would like to think that this (award) is a story that would turn some of it around.

"At the moment, I think the industry is in good health. No doubtedly it will go through periods where it's not quite as rosy as it is at the moment. At present, it has got strong growth, good margins and there is a healthy level of demand."