A future with robotic sheepdogs herding sheep into pens is an unlikely yarn, Federated Farmers says. 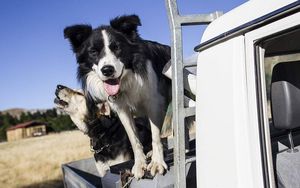 The organisation was responding to reports that academics in Europe believe they have created an algorithm that simulates sheepdog behaviour.

Meat and fibre chairperson Rick Powdrell says any sheep farmer knows there is more to the instinctive connection between the animals than an algorithm.

Issues such as battery life and being able to navigate over challenging terrain would be difficult to overcome - plus a robot wouldn't be able to adapt, he says.

"This time of the year when ewes have got lambs, traditionally most of the year sheep will move off away from the dog, but ewes who have lambs will often stand up to the dog, take the dog on.

"Their protective instinct for the lamb takes over - so replicating that sort of scenario with a robot would be quite interesting."

However, Mr Powdrell believes there is still a place for modern, forward-thinking technology on the farm, and a classic example of this is the drone.

"Drones have and will have a part to play in agriculture in the future. Just because of the fact that you can put something in the air and it can do the viewing for a farmer often saving him a lot of travelling and time."