Rio 2016 Olympics - US swimmer Katie Ledecky broke her own world record on the way to winning the women's 400m freestyle gold medal, in what she hopes will be the first stage of a rare treble win. 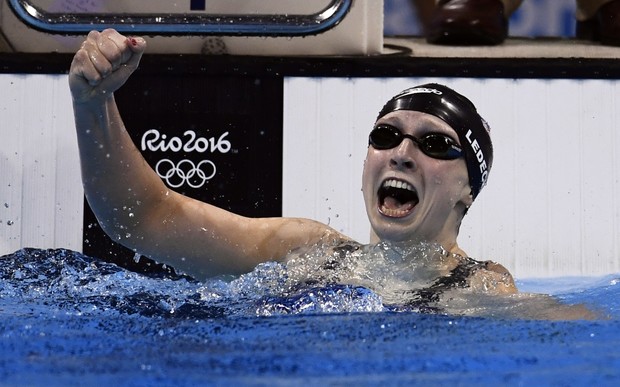 Ledecky, who had come close to the record in the morning heats, led from start to finish on Sunday (Monday NZT) to set a new mark of three minutes, 56.46 seconds, shaving 1.91 seconds off the previous best she set in Australia two years ago.

"It feels really good. I'm pumped. I was so close to breaking it [this morning]," Ledecky said.

"I felt good throughout. The swim was almost identical to this morning, but with a bit more pop on the last lap. It's pure happiness."

It was the sixth world record to fall in just two days of competition at the Olympic Aquatics Stadium.

Jazz Carlin took the silver medal on a great night for British swimmers, minutes after Adam Peaty had won gold in the men's 100m breaststroke, the first British male swimmer in 28 years to win an Olympic title.

Leah Smith of the US won bronze.

Ledecky's winning margin of 4.77 seconds underlined her total dominance of the event.

The 19-year-old is also the overwhelming favourite to take the 800m freestyle, in which she won gold in London four years ago, and is also competing in the 200m freestyle.

New Zealand's top medal hope, Lauren Boyle, failed to qualify for the 400m freestyle final but will be competing against Ledecky in the 800m - Boyle's favoured event - on Friday.

If she wins all three, Ledecky - who also won a silver in the 4x100m freestyle relay on Saturday - will be the first woman to achieve the feat since American Debbie Meyer at the Mexico City Olympics in 1968.

Michael Phelps, meanwhile, has won the 19th gold medal of his Olympic swimming career, after helping the US men's team to victory in the 4x100m freestyle relay.

The 31-year-old now has an unprecedented 23 medals with two silvers and two bronzes filling out his tally.