A central Nelson car park that has been turned into a special housing area is testing a new system designed to make development easier. 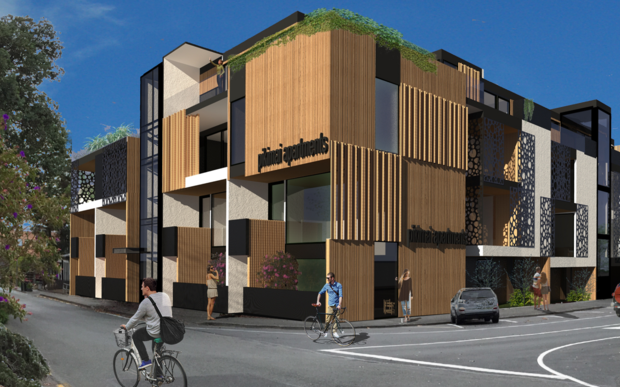 The design concept for an inner city apartment development on a site designated as a Special Housing Area. Photo: SUPPLIED

A syndicate is in talks with the city council over plans it has for a large apartment building in the prime residential area, surrounded by heritage trees and homes.

Some residents are upset by the speed of the process, and the precedent it could set for further similar development.

The site near Cathedral Hill - Piki Mai, was gazetted as a special housing area earlier this year. That meant anything built on it would have a smoother ride through the consent process, and carried limited appeal rights.

Neighbouring resident Belinda Fletcher said it raised some big questions. She said they were not opposed to development on the site, but the scale of what was proposed. The 15-apartment complex would be four levels and up to 15 metres high in an area of mainly one and two-level housing.

"I don't thing anyone is saying there shouldn't be some development - it just seems to have been presumed that this would be a good special housing site, and it does seem odd to those people who have objected to it that this should be the appropriate place for a block of apartments," Ms Fletcher said.

Special housing areas were being pushed by Building and Housing Minister Nick Smith, who is also the Nelson MP.

Ms Fletcher said many were concerned about the limited consultation. Of the 36 people who expressed a view on the inner city project, 12 were in support.

"It's unclear how many other proposals there were. We're only aware of one - there many have been more but it would have been good to know what those other options were. It was like flying blind making a submission."

Sussex Mews is next to the site where a large apartment block is planned. Photo: RNZ / Tracy Neal

James Purves, who developed an award-winning, low-rise apartment complex Sussex Mews next to the site, said he did so with an open mind about what could happen next door.

It has happened sooner than he thought.

"There was always that possibility - we all know you don't own your own view. However, council had indicated three years ago that it was not in the medium or long-term plan to sell that property.

"I had approached them to see if I could potentially purchase it to develop it at the same time," Mr Purves said.

The council said one of its priorities was to encourage greater housing choices for first home buyers, young families and people looking to downsize.

Arthouse Architects director Jorgen Andersen, who was working with the construction syndicate on the project, said affordability was one criteria of the draft concept.

He also said the council process had been rigourous, and the document written by council staff was one of the best that had come across their desk.

"It was an open tender and subsequent to that they issued a very thorough document that put a whole raft of additional design restrictions in place."

Mr Andersen said the building had been designed to meet expected demand for inner city living from a mix of people who ultimately wanted to be less reliant on cars.

He added that the council-driven process had advantages for the community.

"If we were trying to put up something to maximise profit there would be 20 units there. We've opted for 15 because we felt the density for Nelson and for that location suited that site better, and it gave us the opportunity to be able to provide additional green amenity space."

Mr Andersen expected prices for an apartment would range from about $500,000 to $1 million.

Ms Fletcher said it would be the start of a domino effect which threatened the look and feel of Nelson city.

"Why people love it, and why tourists come is because of its quaintness and uniqueness, and its heritage buildings."