A rare false killer whale which stranded on a popular Christchurch beach has been floated after it was found this morning alongside an already dead companion. 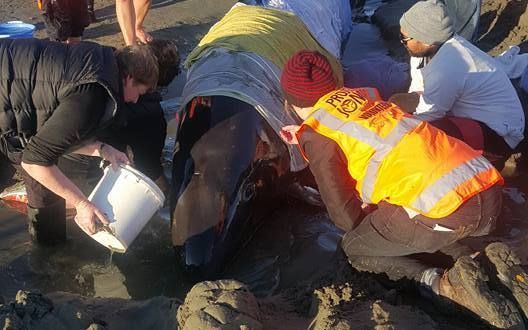 Volunteer medics from the group kept the whale alive while contractors dug a channel out to sea.

The two stranded whales were found on Waimari Beach, near Bottle Lake Forest, about 15km north of Port Levy early this morning.

One of the whales was already dead.

Mr Lilley said it was a great relief saving the whale, but now all the effort was going into making sure it did not strand again.

"It's basic first aid is to keep them upright, keep their body temperature down. And you've got to keep the stress down because whales have to remember to breathe.

Mr Lilley said it was a false killer whale, rather than a pilot whale.

"It turns out it's quite a rare whale, what strands a lot is long-finned pilot whales, but it's not it's a false killer whale.

"The Coast Guard will guide it out to sea and keep an eye on it so it doesn't get to close to shore again."

Ron Vanderlam who watched the efforts all afternoon came along because he had never seen a stranded whale before.

"You hear about stranding further north, but we've never seen one here so it's amazing to see all of these people here jumping into the cold sea in order to save the whale.

"It's sad to watch but watching the whale swim out to sea was very calming, its such a beautiful animal," Mr Vanderlam said.

A karakia was said for the dead whale, which was then removed from the beach.

It would examined, then buried. 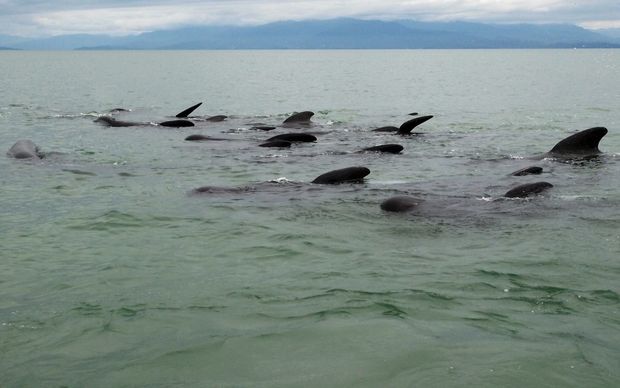 Project Jonah general manager Daren Grover said a pod of 60 to 70 pilot whales was spotted about half a kilometre offshore from Port Levy, on Banks Peninsula yesterday.

He said about 25 volunteers had been looking after the surviving whale before it was refloated.

Mr Grover said the surviving whale appeared to be an older calf.

He said the council and DoC were responsible for disposing of the dead whale, which would most likely be buried at the beach.

"There will be a burial ground on that coastline, probably up in the sand dunes. Local iwi will be consulted and there will be a procedure followed there to bless the whale before it's removed."