Nails believed to have been deliberately scattered on a controversial cycleway in Wellington are up for sale. 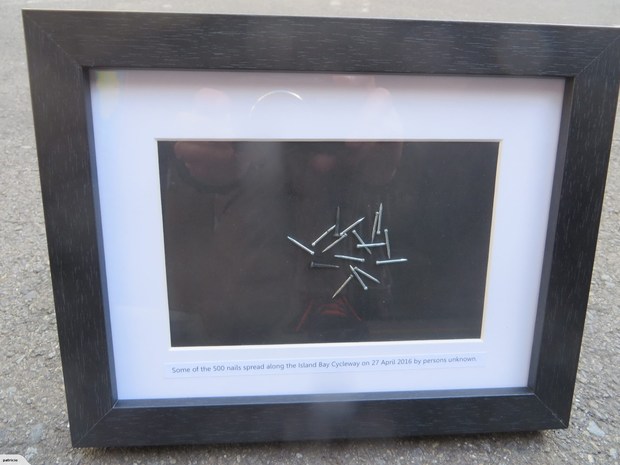 The "Harder than nails" collectable plaque is for sale on Trade Me. Photo: Trade Me auction

The nails found on the Island Bay cycleway last month are being auctioned on TradeMe by the Cycling Action Network, with bids at $100 on Sunday evening.

The $1.7 million cycleway has been the focus of intense public debate, with many residents opposed to it running between the footpath and parked cars.

Last month, one resident discovered hundreds of nails, in five piles, along the route.

At the time, Wellington City Council said there was no way to tell if the nails were intentionally placed there - but Patrick Morgan, from the Cycling Action Network, believed they were.

Mr Morgan said he started the auction to send a message to anti-cyclists.

"The point of this exercise is to show that attacks on cycling won't succeed. You can say this has galvanised the cycling community," he said.

"People on bikes have to put up with hills, with weather, with traffic, a few nails on a cycleway won't put them off riding their bikes.

"So we thought we'd make the point that people love cycling, and we'd use this as a fundraiser to fund our campaigns."

Mr Morgan said the proceeds would be kept by the Cycling Action Network to advocate for cyclists.

"We want to spread the word that cycling is here to stay and despite any backlash, most people get along just fine," he said.

The president of the Island Bay Residents' Association, who is against the cycleway, wasn't available for comment.