Four people including a firefighter have been taken to hospital following a fire at a Dunedin flat where the band Six60 was formed. 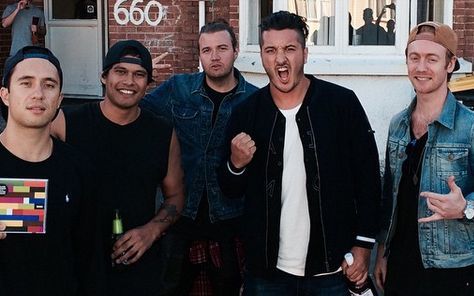 Four fire trucks were sent to 660 Castle Street after receiving multiple calls just before 7am.

This looks bad. Hope everyone is doing ok. Send us any info. https://t.co/ZGF6kddfXl

One was being treated for serious burns to his hands and cuts from broken glass.

"He's got himself on to what he thought was ledge, that wasn't, and dropped to the ground and he's got a fairly bad injury to his ankle."

Two other occupants were treated for suspected smoke inhalation, and a firefighter was treated for a knee injury.

Mr Voight said most of the smoke detectors had been taken down; he found one smoke alarm in a cupboard and another halfway down a wall.

Band member Ji Fraser said he was sad to hear about the injuries.

In March, an overloaded balcony at a nearby house collapsed during a concert by the band.

Eighteen people were injured, two seriously, when the deck suddenly gave way, plunging three metres onto the crowd below.

The house on Castle Street where a balcony collapsed during a concert by the band. Photo: RNZ / Ian Telfer