Height sensor signs at the Penrose overbridge will soon be much harder to miss, New Zealand Transport Agency (NZTA) says. 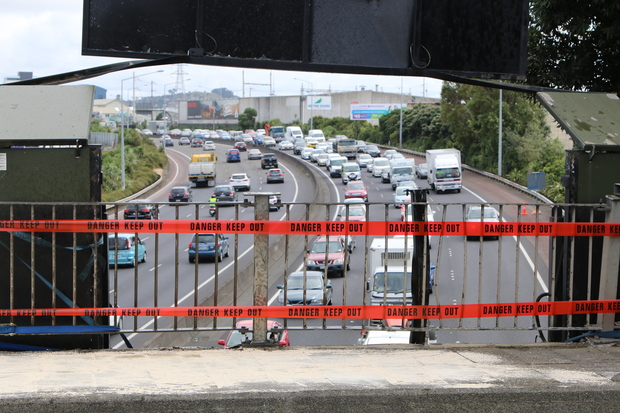 Part of Auckland's southern motorway was closed for hours on Monday afternoon after a driver hauling a heavy digger crashed into the overbridge at 1.20pm.

The driver, who failed to stop as he approached the bridge just after 1pm, hit the bridge and caused the digger to topple.

Traffic was reduced to a crawl for four hours.

An NZTA spokesperson said sensors which flash a warning to drivers if the load is too tall went off yesterday, but the system was being upgraded to make it more visible.

Auckland Chamber of Commerce chief executive Michael Barnett, who was stuck in the traffic, said the company involved in the crash should be held responsible.

He also said NZTA needed to make sure companies complied with the rules.

"It was chaos because the motorway was jammed and, of course, what people do in Auckland is they immediately start thinking 'what are the alternatives', so the rat-running starts".

Mr Barnett said it took him an hour and 45 minutes to get home yesterday evening when it normally took 45 minutes.

He said the agency needed to improve how it responded to accidents.

"Given the dependence we have on the motorway here in Auckland I think the way that we respond needs to be really special."

In response to Mr Barnett's criticism, NZTA said the police and other emergency services were on site shortly after the accident to provide traffic management.

"The incident response crew, which also has to travel through the same congested roads as other traffic, arrived and began clearing the site and repairing damage to the road surface 40 minutes later," it said.

All lanes were reopened at 4.37pm.

Transport Agency Auckland Highway Manager Brett Gliddon said he understood the frustration of motorists who were affected by incidents on the motorway.

"When two out of three lanes are blocked, it is going to have a significant impact on traffic, which is why the transport agency has a dedicated incident response team designed to clear incidents as quickly as possible and get traffic moving again," he said.

The digger involved in yesterday's incident came to rest under the overbridge which meant it needed to be pulled out from under the bridge before being lifted off the motorway, he said.

"This work, within in a confined space and surrounded by live motorway lanes, takes precision and care, and we need to ensure the work is carried out in way that ensure the safety of road users and the response team," he said.

The upgrade to electronic signs about 300 metres before the bridge would be finished in the next three months, making them "even more difficult to miss", he said.

Mr Gliddon said NZTA worked very closely with the freight industry to ensure its members were aware of the height requirements of the bridge and others on the network.

A similar crash happened in March at the same overbridge, which is the lowest on the city's network but more than 20 centimetres above the maximum legal height for vehicles.