A crash on Auckland's Southern Motorway which caused traffic chaos sounded like a building being demolished, a witness said. 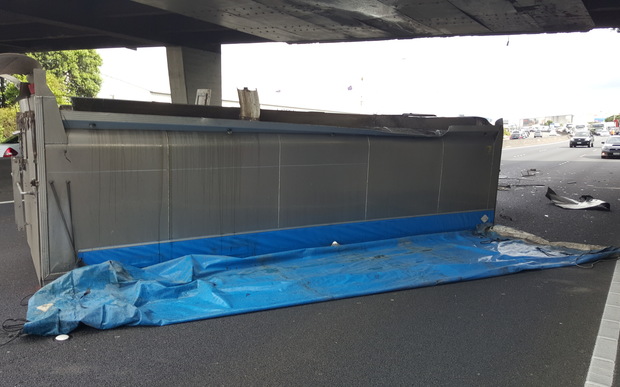 The truck lay on its side after hitting the overbridge. Photo: SUPPLIED

A truck and trailer hit the Penrose Road overbridge shortly after 11am this morning, flipping the trailer and blocking southbound lanes.

State Highway 1 south-bound ground to a halt, while rubberneckers slowing to catch a glimpse of the crash scene caused traffic jams on the north-bound route. 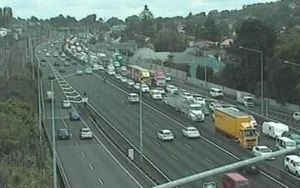 Traffic has quickly backed up to Greenlane after a flipped truck blocked SH1 Photo: NZTA

All southbound lanes at the Penrose overbridge are now open but New Zealand Transport Agency is advising motorists to allow plenty of time with traffic still heavy in both directions.

Southbound lanes between the Ellerslie Panmure offramp to the Mt Wellington on ramp will be closed from midnight until 6am tomorrow morning for emergency work.

The agency recommends motorists use Great South Road as an alternative.

Mark Paine, who was on an industrial property bordering the motorway, said he heard the crash this morning before he saw it.

"It was quite a crash and we saw debris go flying - it just seemed to us like a tall building had been demolished."

The trailer and cab separated in the crash and the cab had come to a halt several hundred metres south of the overbridge, Mr Paine said.

He climbed over the fence of the property he was on, which bordered the motorway, but could not get close enough to the cab to check whether the driver was safe, he said.

The Sthn Mwy is CLOSED at Ellerslie due to a truck crash. Please avoid the area & take an alt route. We'll update with more info soon ^LC

It was lucky that no one had been walking across the overbridge at the time of the crash, Mr Paine said.

"We actually drove across that bridge when we left and there was some debris that had flown across."

The same overbridge was hit by a large campervan in October last year. The motorhome damaged the bridge in that incident, and the road had to be closed due to dangerous debris. 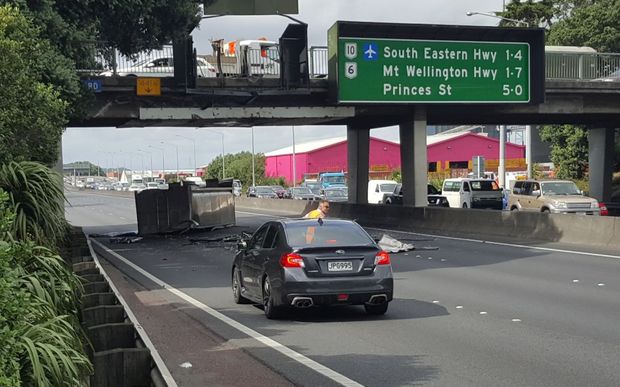 The truck flipped onto its side after hitting the Penrose overbridge on Auckland's Southern motorway. Photo: SUPPLIED 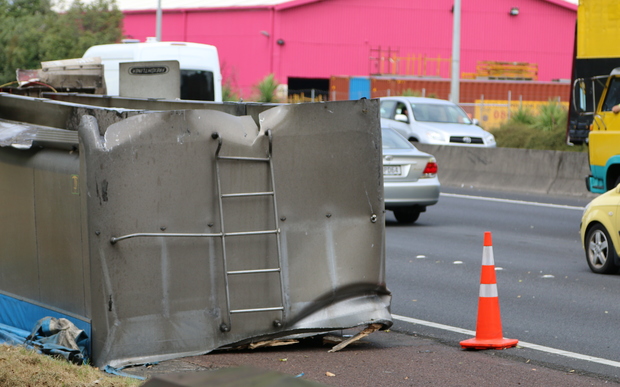