Another log truck has rolled this morning in Whangarei, the fifth in a month, prompting angry residents to consider taking the law into their own hands. 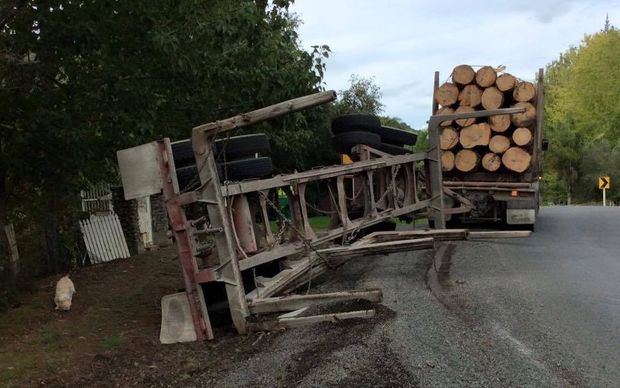 The truck, which was empty, rolled on a bend about 5.30am on Otaika Road, bringing down power lines and closing the road.

It is the fifth log truck to roll in Northland in a month and the second, in that period, to roll on the same bend.

Spokesman for Northland's Grow Rail lobby group Albie Barr said local residents felt the situation was out of control and there had been talk of barricading Otaika Road.

"They're talking pretty drastic measures, and I don't blame them," he said.

"The last truck that rolled on that bend, it happened at 2.30 in the afternoon, and there's a school bus packed with kids that rocks along that road after three. But we've advised them not to take the law into their own hands."

Mr Barr said it was a matter of good luck, not good management, that no-one had yet been injured or killed as a result of the rollovers.

He said log truck drivers were in some cases immigrants, inexperienced, or both, and under pressure.

"So the pressure is on them to do long hours, and to get in as many trips as they can from the forest to the port in a day."

The police said the driver of the truck that rolled this morning suffered minor injuries, and their Serious Crash Unit was investigating.

The bend on which the crash happened has an advisory sign of 55km and police have previously said the main cause of the rollovers was excessive speed, or inattention on corners.

Mr Barr said a public meeting about the log trucks had been organised for next Tuesday, 10th May at 7pm in the Otaika Hall.

He said there would be an extra 100 log trucks a week on the road by spring, if KiwiRail went ahead with plans to mothball the rail line north of Whangarei.