Beach-goers in New Plymouth are being warned to keep clear of cliffs because a very dry summer has increased the risk of their collapse. 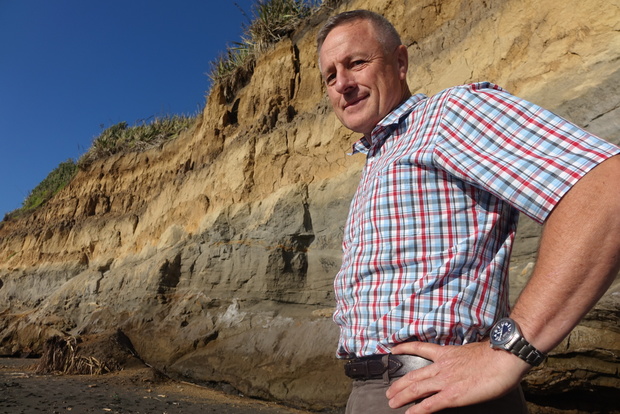 Cliff collapses were a symptom of the great summer Taranaki has had, said Steve McGill. Photo: RNZ / Robin Martin

Customer response co-ordinator Steve McGill said the cliffs between Paritutu Rock and the lower Centennial Drive car park were particularly dangerous, but a district-wide warning had been issued.

Mr McGill said the cliffs were drier than usual and more prone to chunks of earth and rock shearing off.

"We're just concerned that people are still wandering along underneath and putting themselves at risk and it's only going to get worse with the coming winter as rain and water gets in behind the cracks and that will soften and loosen these pinnacles up, putting people at risk."

Mr McGill said people should not put their towels and clothes at the base of a cliff when they go for a swim and not walk along the base of cliffs.

It was safer to stay nearer the sea, he said.

No incidents have been reported, but Mr McGill said a number of people had rung the council pointing out the problem and asked what was being done about it.

"We certainly have signs at the major carparks and access ways to beaches warning of possible rock falls. It's just a symptom of the great summer we've had that the coastal cliffs have dried out and are starting to sheer off and it's only going to get worse with the winter rains."

A local surfer at Back Beach in New Plymouth, Gabe Pitanoe, said he had not really noticed the cliffs crumbling until his attention had been drawn to it.

He said it was generally a good idea to give the cliffs a wide birth.

"It's safer to keep your gear closer to the shore rather than get hit by a falling rock I guess, but beware of the tides."