A sign mocking American presidential candidate Donald Trump has been stolen from outside an Auckland Church. 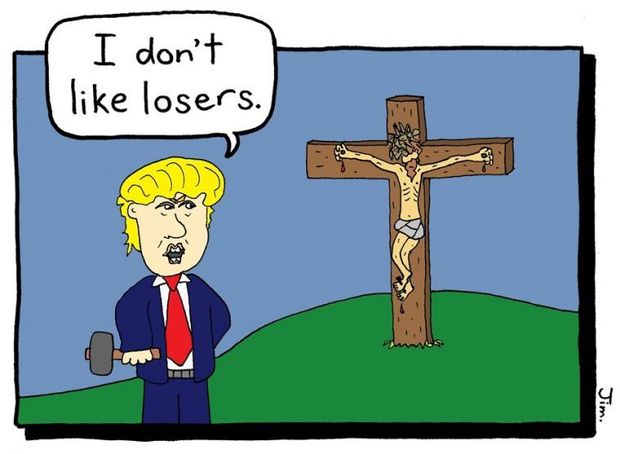 The image which was displayed on a billboard outside an Auckland church. Photo: Facebook - The Community of Saint Luke

The billboard, which depicts Mr Trump nailing Jesus to the cross while saying 'I don't like losers', has been attracting its fair share of negative attention, especially from conservative sites in the United States.

But The Reverend Glynn Cardy said he believed most local Christians were anti-Trump.

"Winners in Donald Trump's world are people who are wealthy and powerful and really Jesus was the opposite of that. Jesus was someone who never had a job or an income and he died a criminal's death."

Mr Cardy said Mr Trump's statements against Muslims, Mexicans and other minority groups were the antithesis of Jesus' view of loving your neighbour.

Mr Cardy noticed the sign was missing yesterday afternoon after conducting a funeral service at St Luke's Church in Remuera.

"I thought oh bother... bother because right on the eve of Easter most Ministers have got an awful lot going on."

Even the wooden backing was stolen and Mr Cardy says it will cost quite a bit to replace, though he does intend to do so.

He said if the thief, or thieves, want to return the billboard they can leave it outside the church and will be forgiven.

"I don't think it was taken by an art collector."

Mr Cardy said he saw the humour in the stealing of a picture of Jesus at Easter.