Two cats have died, and many others injured after a spate of slug gun shootings and poisonings in Ashburton, but owners say the police and the SPCA need to do more to stop it. 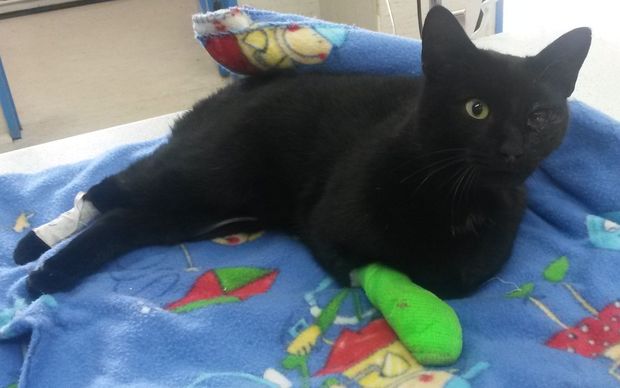 Ashburton cat Billy was shot and injured this week. He eye and spinal injuries and three pellets from a slug gun embedded in his head and neck. Photo: SUPPLIED

They said the injuries had required thousands of dollars of surgery and treatment, and they believe they know who the culprit was.

One cat owner, who did not wished to be named, told Nine to Noon, her cat Billy could lose his eye. He had three slug gun pellets embedded in his head and neck, had received a spinal injury and may never walk properly again, after an incident earlier this week.

She said Billy went missing on Sunday morning, but turned up on Tuesday unable to walk, with had blood coming out of his eye.

"He was in a really bad state," she said. 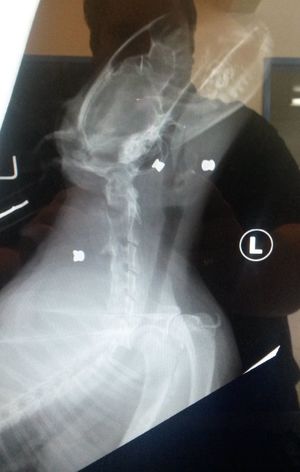 She called the SPCA and was told to report it to police, but when she she went to the station police told her it should be dealt with by the SPCA.

The SPCA has said it would investigate but it would be hard identify the culprit without a witness.

Another cat owner, who also did not want to be named, said she had two cats shot, one fatally.

She had come back from a trip away to find her cat lying dead on the floor. An x-ray showed the cat had been shot in the side.

On a separate occasion another of her cats needed several surgeries for badly broken bones in its foot.

"The vet, after a bit of an investigation, discovered she (her cat) had been shot which was actually quite a surprise, I wasn't expecting that.

"It was a very expensive very long, very time consuming trip to the vet, and very distressful for the cat at the same time."

She reported it to he SPCA and the police, who came and took the pellets away to be looked at, and also spoke to people in the neighbourhood, but they didn't come up with anything, she said

"In hindsight, I'm not quite sure she went quite far enough with her inquires. I think she might have focussed a little too much on the immediate neighbourhood."

She knew of other cats in the neighbourhood who had been beaten, poisoned and shot, some many times.

"It is appalling animal cruelty because it was multiple times and clearly at close range, which is not accidental and nobody should be allowed to do that."

She said there was a "local rumour that very clearly points to a likely culprit", and police needed to put a stop to it.

SPCA chief executive Ric Odom said sadly it was not uncommon for people to attack cats.

He said the SPCA was investigating, but any gun incidents were a matter for the police.

"What we can do and what we will do, is we will investigate complaints that relate to cruelty or poor animal welfare outcomes, and that is what we will do. In this case there is a a bit of an overlap."