A fire near Hanmer Springs which flared up this morning has now been contained, the Fire Service says. 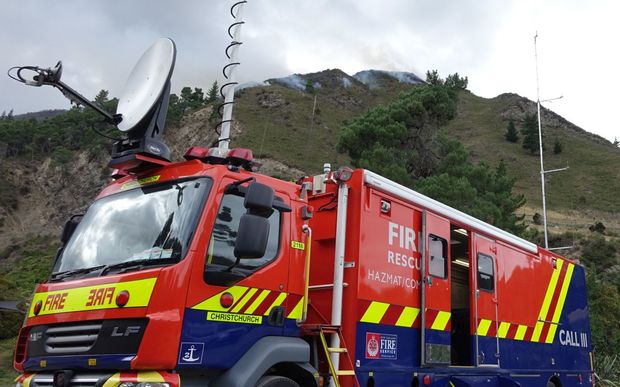 The fire blazes on the hill behind the fire service's command centre outside Hanmer. Photo: RNZ/Conan Young

The fire burned through about 90 hectares of dry scrub and pine forest forcing 28 people to leave their homes and power to be cut to the north Canterbury town.

The Fire Service said the fire had flared up significantly this morning due to high winds.

It has since been contained, although ground crews and two helicopters are still fighting the blaze.

Extra fire resources were sent from Christchurch and police also sent resources to monitor the situation.

MetService has issued a severe weather watch for the region, with gusts of 160 kilometres an hour expected in the Canterbury High Country.

Winds have the strength to bring down trees and powerlines and make driving hazardous.

Bremar Lodge manager Dominic Towery said there was a wall of flames in the trees across the road earlier this morning.

Helicopters have since extinguished the fire near the lodge, but residents have been told to be prepared to evacuate.

In inland Canterbury, two helicopters and 50 crew are fighing a fire near Lake Coleridge.

The Fire Service was called to the fire on Double Hill Run Road at 4am.

A spokesman said the fire was deep seated in the ground, and had a front of 900 metres.

It has been contained.