The days may be a little cooler and the mornings a little dewier but the public is being warned not to take a risk with lighting an outdoor fire. The warning comes as fire crews battle a 90ha blaze across steep, heavily vegatated terrain near Hanmer Springs, cutting off access to the tourist town.

The cause of the fire is unknown but it started near a riverbed just before midnight last night and spread up a hill, fanned by 50km wind gusts overnight.

However, many areas had fire bans in place, and people needed to heed them. 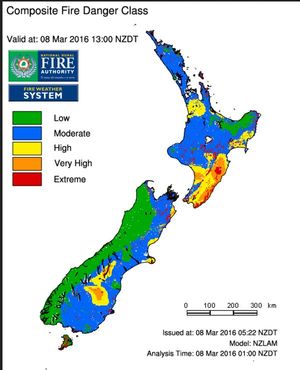 "People think we've had a little bit of rain and it might be looking like it's slightly greener, and they think the fire season is over," Mr Rasmussen said.

"Well that's the danger period because it's not. I'd warn people just to be patient and not light any fires at the moment."

The fire risk had been exacerbated by the long, hot summer, with MetService records showing several places had their hottest February since records began.

Mr Rasmussen said temperatures were starting to drop, and there was often dew in the morning, as summer morphed into autumn. However, that did not mean the risk was gone.

"We've had recently around the country things like people mowing their hay or topping their paddocks and the mower is striking a stone and starting fires, so it's sort of that dry in places. It's a time not to go lighting fires." 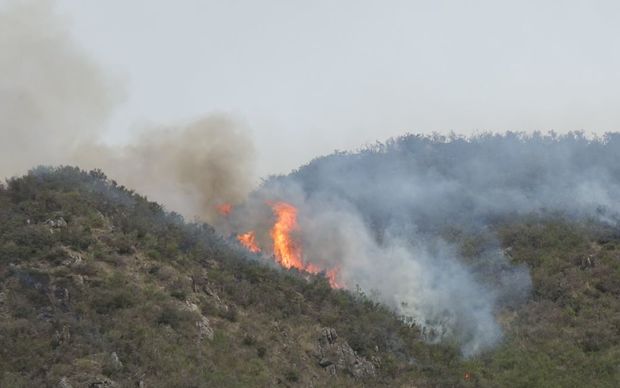 Fire on the hill close to the main entrance to Hanmer Springs. Photo: RNZ/Conan Young

Anyone found to be responsible for starting a blaze could be prosecuted and held liable for the cost of fighting it - and in some cases that could be up to $1 million, Mr Rasmussen said.

Farmers and businesspeople tended to have insurance to cover such events but insurance companies needed to be satisfied people were acting responsibly before they paid out.

"Check it's all right before you light."

National Institute of Water and Atmospheric Research forecaster Chris Brandolino said temperatures in the area had been unusually warm, with the mean maximum temperature of 24.5°C being 3.5° above average; the hottest day was 27 February, when the mercury hit 34.2°.

"If you look back over the last five days of February and the first seven days of March ... there's only been two days where the temperature has failed to reach 20," Mr Brandolino said.

As well as the high temperatures, there had been little rain: only 33mm fell last month compared with the usual 64mm.

"When you have dried vegetation, if there is a spark or a fire, that can obviously act as fuel," he said.

"You can see the result, and the conditions have led to that."

Mixed weather was forecast for the coming week but it was expected to be "abnormally" warm again next week, Mr Brandolino said.