A residents' association in well-heeled Island Bay is threatening a rates revolt if a cycleway that is not even finished yet is not canned, and quickly. 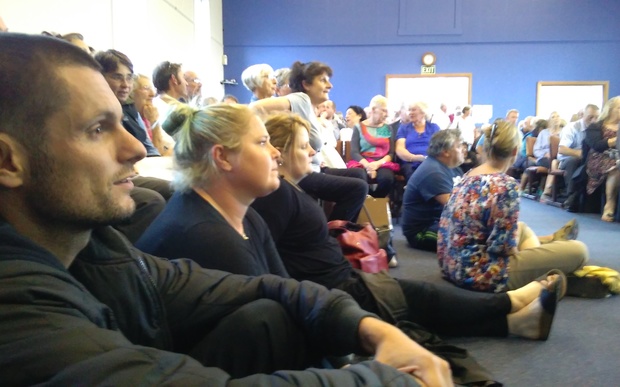 The group called a church hall meeting last night over what may be the country's most-hated bike path.

Several hundred people turned up, and sent a clear and unwelcome message to the city council.

The crowd spilled out into Island Bay Parade, right next to the cycleway which, unusually, runs between the footpath and the parked cars.

Inside the hall, residents' association president Vicki Greco presented a survey they had done showing most of the 1700 respondents wanted the $1.7 million cycleway gone.

"As the result is resounding, we will formally be requesting that the council switch it back ASAP," she said, to claps and cheers.

Councillor David Lee got the loudest booes of the night when he questioned the survey, saying it showed only a third of local people were opposed.

He was one of three pro-cycleway councillors who turned up, among seven councillors in total - but Wellington mayor Celia Wade-Brown was not there.

The seven were left in no doubt what locals thought, by a ratio of 30 voices raised against one or two timidly in favour of the bike path.

Brendon Bonner said it had created havoc for other commuters.

"Are you going to make it really clear that we also want the bus stops that have been removed from the parade put back?" he asked Ms Greco, when the meeting was opened to questions from the floor.

Others spoke of being unable to safely get out of their cars because the road was now so narrow for buses, of multiple wing mirrors being smashed off - or other minor accidents.

Another local, Robin Page, said only a bad injury or death would budge the council.

He urged people to instead change tack, and raise the alarm in the likes of Seatoun and Lyall Bay against being railroaded over cycleways there.

Stephanie Wenman drew a laugh recalling walking all the way up the cycleway several times counting bikers as she went.

Councillor and Transport committee chair Andy Foster defended the need for cycle lanes and said any change in Island Bay would have to wait for a safety audit, once the actual work building the lane was finished.

But he did not rule out repainting the road lines by the middle of the year.

Locals spoke time and again of wanting a timeframe that was firmer than that.

Mayoral candidate councillor Nicola Young will now take the resident association's notice of motion to a council meeting next Wednesday.

Ms Greco needed just one councillor to change sides and if that did not happen, she said, withholding rates might come next.

"We will put that to the community next. We've been asked before to do that. People have wanted to do it before now - we've said let's wait and hopefully we can win it this way."

Ms Young advised against a rates revolt, saying the council's response could be punitive.

Mr Foster admitted the depth of the opposition had surprised the council and they would need to do better.

But another councillor, Jo Coughlan, was calling for an inquiry into the council's way of consulting neighbourhoods. She said too much was at stake when $100m was to be spent on cycle lanes across the city in the next 20 years.