Former television executive and journalist Bill Ralston has formally launched his bid for a seat on the Auckland Council, at an event peppered with past and present National Party figures. 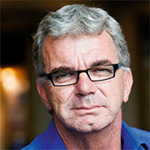 Mr Ralston is running as an Independent in the Waitemata and Gulf ward seat currently held by the centre-left veteran Mike Lee.

He told a gathering in Ponsonby he advocated lower rates rises, a partial sale of the operating side of Ports of Auckland, and investment in transport projects such as more dedicated busways.