The course manager of a popular rowing lake in the Mackenzie District is urging rental car companies to help make sure freedom campers behave. 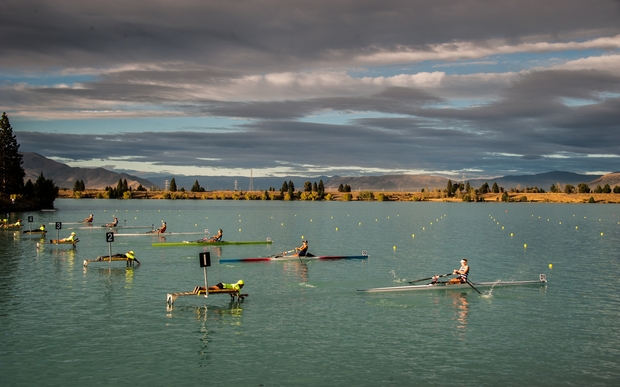 The National Rowing Championships at Lake Ruataniwha in Twizel on 21 February 2013. Photo: PHOTOSPORT

The Mackenzie District Council has been dealing with complaints about visitors fouling Lake Ruataniwha, in Twizel, which hosts the Maadi Cup, with more than 30 campervans a night staying in a free park-up area by the start of the rowing course.

South Island Rowing course manager Trevor Wilson said some freedom campers that had been approached were ignorant of where they could camp and many could not speak English.

"They broke into our port-a-loo up at the start area, which I wasn't impressed with. And behind one of the sheds, they're obviously doing business that they shouldn't be doing.

"They sneak in - some of them were sneaking into the actual complex. We've approached them and some of them have been completely ignorant of why they're there and why they can't be there."

The rental car companies had a responsibility to ensure the tourists knew where they could and could not camp and what behaviour was expected, he said.

Freedom camping has been in the spotlight across the South Island after an increase in visitor numbers this summer.

Tekapo Community Board member Stella Sweney said a by-law to stop campervans parking up by Lake Tekapo had pushed the problem to Lake Pukaki, with one resident saying he'd seen tourists using the tussocks as a toilet.

In Nelson, a resident said travellers were using the facilities at a local swimming pool to wash themselves and their clothing - despite a toilet and shower being provided at a designated carpark.

Complaints around campers' behaviour have also prompted a crackdown by councils in Queenstown and Christchurch.