Double murder-accused Russell Tully has been removed from the High Court in Christchurch after a loud outburst. 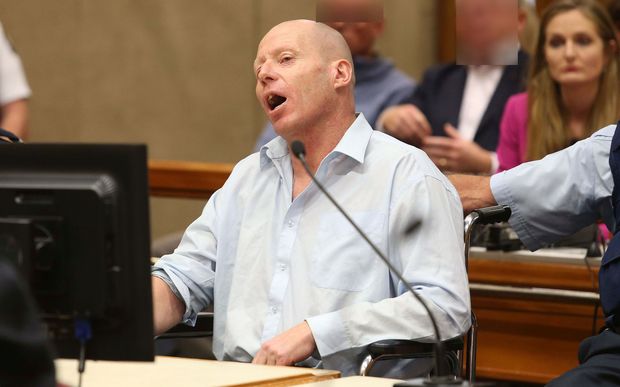 The 49-year-old is charged with the murder of Peggy Noble and Leigh Cleveland and the attempted murder of two of their colleagues at the Ashburton Work and Income office in September 2014.

He also faces charges of setting a man trap, unlawful possession of a pump action shotgun and a second shotgun and ammunition.

Mr Tully was absent from court yesterday for the first day of the hearing, for reasons that have been suppressed by the judge. 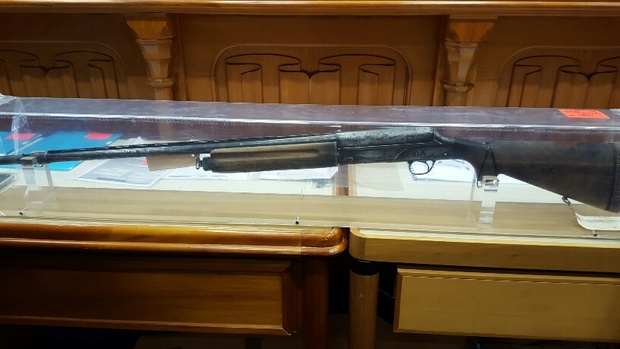 The shotgun found on Mr Tully when he was arrested which is different to the one used in the shooting. Photo: Pool photograph

Today Mr Tully, who is defending himself, appeared in court in a wheelchair flanked by two corrections officers.

But as soon as the proceedings began he yelled over the judge, asking why he had been brought in to court.

"This morning you excused me to go and lie down because of my medical condition right.

"Now you've brought me in front of counsel to prove a point, to say that I'm not fit to stand trial, that's what you're saying isn't it?"

At this point the judge ordered Mr Tully to be taken from the court. 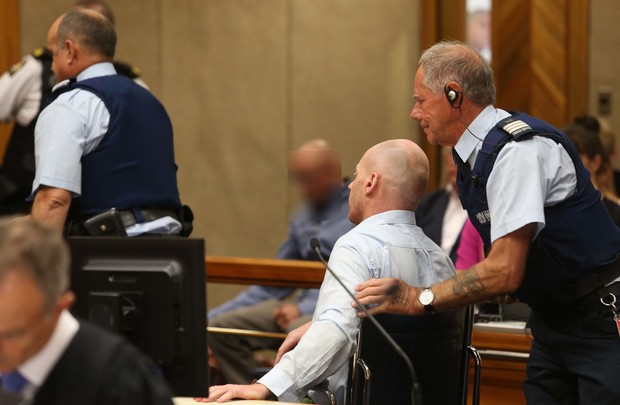 Following his outburst, Justice Cameron Mander directed the jury to put it out of their minds.

"That very short little exchange or pantomime is completely irrelevant to your functioning as a jury, you must...concentrate on the evidence.

"Mr Tully is not present in the courtroom but as I directed you firmly yesterday, that is irrelevant to your task."

Once Mr Tully was removed from court, the trial continued and heard from the assistant manager at the Ashburton WINZ office, Jaimee Carrodus, about an outburst from Mr Tully at the office almost a month before the shooting.

"He ripped that piece of paper into small pieces and he threw it back to Linda at reception. This was the first time I'd seen him become quite aggressive and he raised his voice and it gave me a bit of a shock to start with because up until then he'd been more quietly manipulative."

Ms Tully was angry he was going to have to pay back a grant from the WINZ office for $500 to pay for a cabin at the local camping ground, food and medicine.

Jaimee Carrodus said her office helped Mr Tully numerous times over the two months leading up to the shooting but that the outburst over the grant was the final straw and led to him being served a trespass order from the office.

Jaimee Carrodus was not in the office on the day of the shooting but did see Mr Tully on the Sunday before it happened while she was out walking her dog in the local dog park.

"As we walked out the gate, right under the trees, I saw Mr Tully lying there, sort of looked like he was in a sleeping bag." 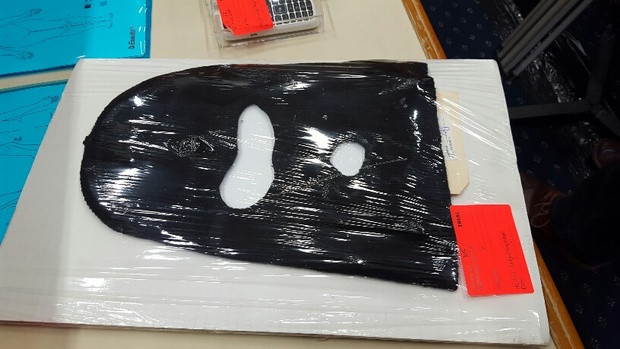 The balaclava the police say was worn in the shooting. Photo: Pool photograph

Evidence was also heard from the WINZ regional manager Shane Carter who dealt directly with Mr Tully when he fell out with staff at the Ashburton office.

"He was very adamant he wanted a Housing New Zealand property. He'd made reference to his medical condition and had said that he'd come back to Ashburton to die and wanted a state house."

Since there were no state houses available in Ashburton, Shane Carter gave Mr Tully the option of moving into a home in either Christchurch or Timaru but he was determined to remain in Ashburton.

Mr Tully is defending himself but two lawyers have been appointed to assist him and the court.

Under cross-examination by one of them, Mr Carter was asked if Mr Tully was angry at the system rather than a particular individual. He answered that this was a fair assessment.

During his opening address yesterday, Crown lawyer Andrew McRae told the jury Mr Tully was intent on killing as many staff members as possible but was also bent on targeting Ms Cleveland and Ms Adams, who he had a grievance against.