A Northland farmer is preparing to take KiwiRail to court for closing a bridge and splitting his farm in two. 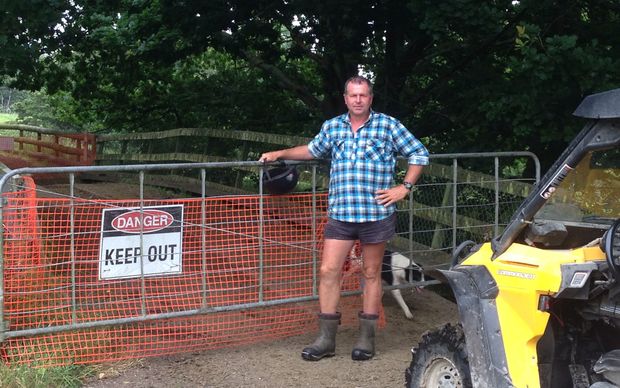 Owen Clements said the bridge was built by New Zealand Railways in 1927, after it took land under the Public Works Act for the North Auckland line and had to provide access for farmers.

For 85 years the wooden bridge, known as North Auckland Line No 143, had been inspected and maintained by Railways.

But in March this year KiwiRail closed the bridge after trying to make him liable for it.

"The issue is that the bridge belongs to the railways and it's on their property. As it got older and older they started to grizzle about the maintenance.

"About three years ago they contacted us and basically said it needed all this work and started to suggest that we pay for it."

Mr Clements said now he could no longer access half his grazing land and he had to stop milking as a consequence.

He said he had questioned why he should pay to maintain a bridge that wasn't his, and that was built in the first place to give the farm the access required by law.

KiwiRail replied that it had no obligation to maintain the bridge, and offered to sign it over to him, along with any obligation to repair or replace it.

Mr Clements declined that offer so in March KiwiRail hung a locked gate across the bridge along with a trespass warning.

The dairy farmer said that left him with two options: sell off half his dairy herd, or change to calf raising.

"We need access to the grazing, we're basically a grass farm. We can only get to half the paddocks from the cow shed

We've had to stop supply because a herd of 130 cows is even more of a joke so we've had to change our farming practice basically."

He said KiwiRail's action has cost him $15,000 in legal advice and taken about $1 million off the value of his farm.

KiwiRail continues to maintain that it is not obliged to maintain the bridge, but said it was still hoping to resolve the matter.

Network Manager Todd Moyle said Mr Clements had been offered a grant - a piece of land from the rail corridor it said he could use to walk his cows from one side of the farm to the other.

"We're hoping that we can resolve this with Mr Clements and we believe there's an integrated solution that we have presented to him looking at formalising grants and the use of land to provide to provide that alternative access to his site."

But Mr Clements said the alternative access route that would involve walking the cows on a public road, which the council would not allow.

Northland MP Winston Peters has taken up the case. He said KiwiRail was using its size and resources as a state-owned enterprise to "bully" Mr Clements.

The company and its predecessors built and maintained the bridge for more than 80 years, as required by the Public Works Act, he said. Now it wanted to cut and run, and confront the farmer with a take-it-or-leave-it offer.

Mr Peters said KiwiRail had a statutory obligation to restore access and an injunction was likely.