Fire crews battling a large blaze in Marlborough hope it will be completely contained by the end of the day. 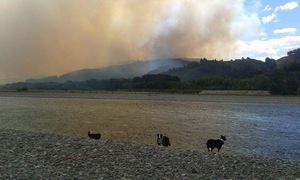 The fire in the Waikakaho Valley has been burning since Wednesday. Photo: SUPPLIED / Carla Duffield

The fire in the Waikakaho valley ripped through about 450 hectares of pine forest over the last four days.

Yesterday's high winds have now dropped although gusts of up to 70 km/hr are forecast for the valley later today.

Three helicopters will be working on the fire today with another three on standby. This has been downsized from 10 helicopters.

A meeting is being held for residents and property owners this afternoon at the Tua Marina Hall to keep people up to date.

Fire authorities, police, the mayor and local council will be there to go over the plans for the next few days and address any issues or questions.

Fire Service incident controller Rob Hands said it could be many days before the fire is extinguished because of deep-seated smouldering continuing, possibly for weeks.

He said a bit of moisture overnight helped the fire to die down slightly.

"We've had 100km winds for the last three days and it hasn't breached our lines to date, so the fire has stayed where it is.

"We're getting more security around the edge of the fire to make sure that doesn't break out and we're hoping that we'll have 100 percent containment by tonight."

Much of the fire crews were volunteers, who had been battling the blaze for four days in hot, windy conditions, Mr Hands said.

"It's encouraging to see them coming in smiling and going out at the end of the day, although exhausted, happy to put their hand up and come back tomorrow. We're looking at getting fresh crews tomorrow."

Mr Hands said in order to relieve the pressure on the local fire fighters they might have to look further afield for backup.

The fire began on a commercial forestry site but a report from fire investigators is still awaited.