Residents currently outside the reach of a large Marlborough forest fire are not taking anything for granted, as it continues to blaze out of control. 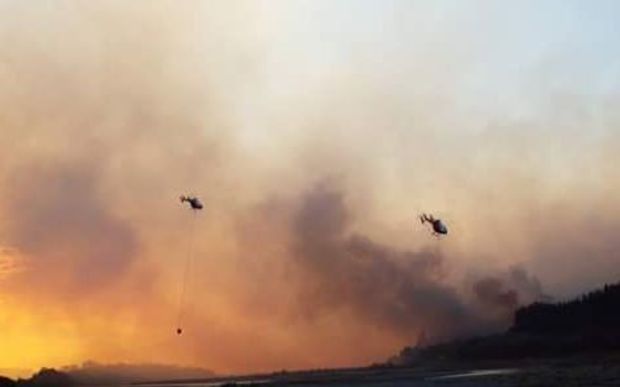 The fire has burnt through about 400ha in the Waikakaho Valley since Wednesday. Photo: Tane Anderson

Today, 50 firefighters, 13 tankers, 10 earth-movers and 10 helicopters continued to battle the blaze, but aircraft were grounded for several hours as wind made conditions hazardous.

During the past two days the fire has burnt through about 400ha in the Waikakaho Valley, north-west of Blenheim, and it was expected to keep burning for some days.

Meanwhile, a second fire was also raging in a block of pine forest on private land, about 2km south of Ward on State Highway 1.

While many people living in the valley have already been evacuated, some in the lower reaches were preparing for a quick get-away. 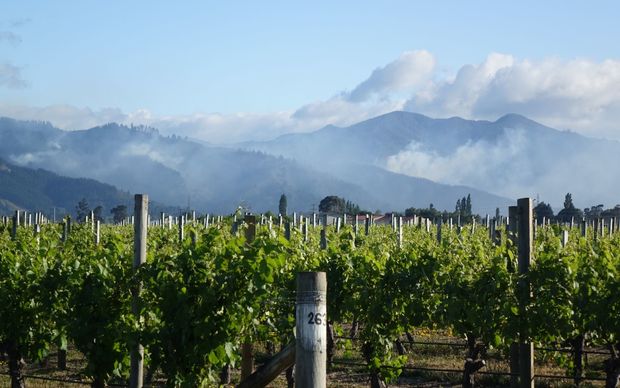 The fire was continuing to rage this morning. Photo: RNZ / Tracy Neal

The family's hilltop property, overlooking vineyards and green river flats, is in the shadow of the blaze raging in the hills behind them.

The challenge of having to leave quickly was harder when they also had to think of their animals, Ms Kerr said.

"It is a concern for all of us. All it would take is a wind change. You could envisage quite easily if that did happen we could have minutes to be evacuated.

"It's easy enough to evacuate yourself... Your house and fittings like that can always be replaced, but it's terrible when you have to leave stock."

The Kerrs have lived locally for almost 16 years, on a valley road that is narrow, with steep hills on one side and a drop to the Wairau River on the other.

All the outside taps on the house had hoses attached if the family needed to start hosing things down.

They were set to go.

"Well I've got a friend with a horse float. I've got three horses and a double float and a friend can come and get the third horse if I can take two of them... Yes, we know what we'd grab if we had to get out.

"We're sort of semi-prepared for that and yes, just basically your handbag with all your important papers in it and, yes, photo albums are all in a box in the office so they'd be pretty easy to grab." 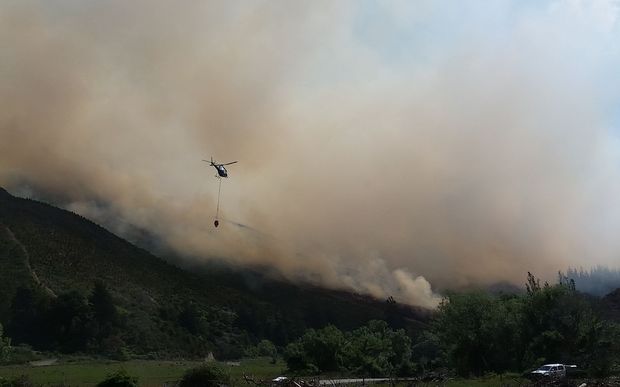 Nine helicopters fought the forest fire by air on Wednesday, with another later joining the effort. Photo: SUPPLIED / Grant Teichmann

Don Sutton lives about 10km from the fire.

His stepson Tony Cairns and his family were evacuated from their home last night but went back this morning. The fire came to within about 40m of their home.

Like many people who live in forestry areas, fire was a risk you had to prepare for, Mr Sutton said. Knowing how to rescue animals was part of that.

"We just put the sheep out. There was only about 20 or so sheep and dogs and chooks, they were just let out to go wherever they wanted. But... I think we've got everything back except for one cat."

Even though Mr Sutton lived a safe distance from the fire, he has not escaped the damage.

The fire ripped through a stand of rare eucalyptus trees he owns, taking more than 90 years of history with it.

He was hoping for rain, but right now that looked unlikely.

The Marlborough District Council is holding a public meeting on Saturday at 2pm at the Tua Marina Hall to update locals on the firefighting.