A teacher who had a sexual relationship with a boy at her school has been sentenced to more than 10 years in prison. 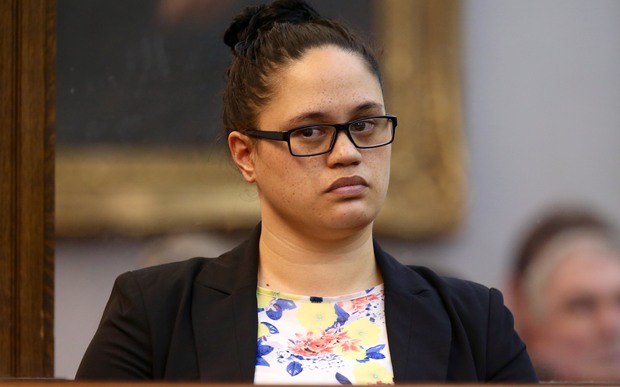 Stacey Reriti has been jailed for more than 10 years on sex abuse charges Photo: Pool picture

Stacey Reriti, 31, was a deputy principal at Natone Park School in Porirua East when she began an intimate relationship with the boy.

She frequently exchanged text messages with him, when he was aged between 10 and 13, and on one occasion took him to a motel in Paraparaumu where they had sex.

In the High Court in Wellington today, Justice Woolford said she had breached the boy's trust and there was no justification for her grooming of him.

He told the court the boy, who was now in his mid-teens, was angry and suspicious of female teachers.

She had shown no remorse or understanding of her actions, he added.

"In fact, after you were charged, and prior to the trial beginning, you sent another underage former student pictures of your breasts when he texted you asking for them.

"This shows a stunning lack of judgement. The lack of any appreciation of proper boundaries undermines any claim that your behaviour was somehow a one-off and unrelated to your general good character."

Reriti has been sentenced to 10-and-a-half years' imprisonment.

The Ministry of Education said Natone Park School had settled back down with help from its trauma team.

It said Reriti's conviction would not have been possible without the boy's bravery, and her jail term sent a strong deterrent message.

The Education Council, meanwhile, has engaged a lawyer to remove Reriti from the teachers' register.

The school immediately suspended Reriti in August 2014 when a complaint was first made.

Natone Park School principal Kiri Smith, who is Reriti's mother, declared a conflict and took no part in her daughter's appointment.

However, Reriti's grandfather, who was on the school board, did not declare this conflict of interest when the police met with trustees.

The police told the ministry they were worried the family link could hinder their investigation.

Since then, the board has set up a subcommittee to deal with the matter that Reriti's mother and grandfather are not on.